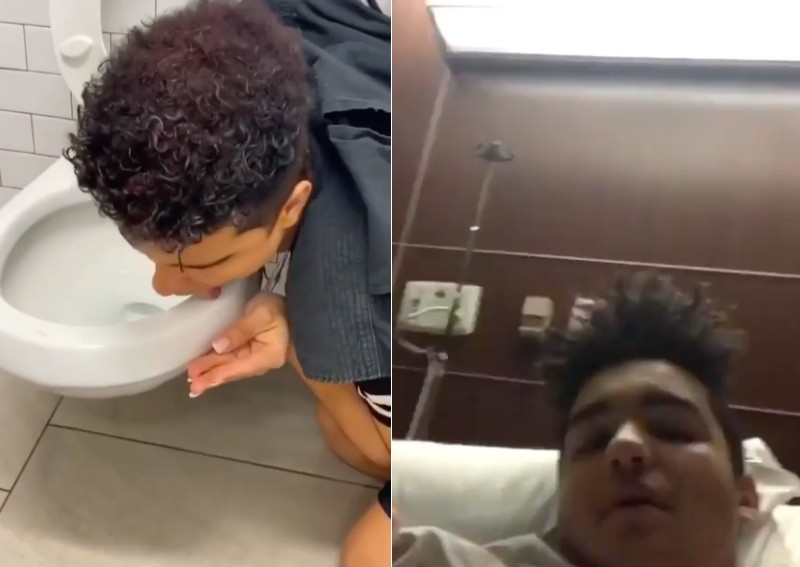 How far would one go for online fame?

For one social media influencer in the United States, it meant licking a toilet bowl to get people's attention.

Now, Larz may be paying the price for his antics as it has landed him in hospital.

Mimicking what TikTok user Ava Louise did for #coronaviruschallenge, he sauntered into a public bathroom and took a long lick at the toilet seat in one of the stalls.

A clip of the act was uploaded on his Twitter account on March 20, with an invitation to 'RT (retweet) to spread awareness for the Coronavirus.'

Two days later, Larz uploaded a clip of himself lying on a hospital bed, saying "Look at the mess I'm in" as he announced that he tested positive for the Covid-19.

The online community slammed his actions, with some saying that Larz is "desperate for attention" and others commenting: "When you go around licking toilets, you get exactly what you deserve."

British journalist Piers Morgan also asked: "Why is this moron getting treated? He should be in jail, not taking up a vital hospital bed."

While it is not clear whether his diagnosis is just another publicity stunt, contracting the Covid-19 through toilet seats could be possible.

A study in Singapore found that the virus lingers in toilets after patients have used them, and may potentially infect others if not disinfected.

According to the World Health Organisation (WHO), the virus is spread through respiratory droplets from an infected person, as well as surfaces contaminated by the droplets.

And recent studies have shown that youths are not invulnerable to Covid-19 as presumed by people such as Ava Louise who told an AFP reporter that "it's all [the old people's] fault we can't go to the beach."

Last week, WHO director-general Tedros Adhanom Ghebreyesus warned the youths: "You are not invincible, this virus could put you in hospital for weeks or even kill you."

"Even if you don't get sick, the choices you make about where you go could be the difference between life and death for someone else," he added.

So folks, don't go around being a Covidiot.