Israeli Prime minister Benjamin Netanyahu delivers a statement to the media in his residency in Jerusalem Feb 28, 2019.

It was the first time a serving Israeli prime minister has been put on official notice of planned prosecution, and deepened uncertainty over how Netanyahu, a veteran right-wing leader, will fare against a coalition of upstart centrist rivals.

An actual filing of the charges of bribery, fraud and breach of trust would depend on the outcome of a required hearing, the Justice Ministry said. That could take months to complete.

At that hearing - which could take place after the April 9 election - Netanyahu can try to persuade the attorney-general, Avichai Mandelblit, not to indict him.

His voice brimming with indignation as he addressed the nation during prime-time TV news, Netanyahu dismissed the three criminal cases as a political "witch-hunt" designed to oust him.

"I intend to serve you and the country as prime minister for many more years. But it's up to you," he said, referring to his hopes of winning a fourth consecutive term in April. 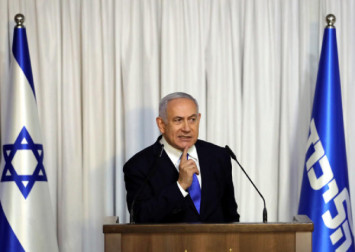 Netanyahu is suspected of wrongfully accepting US$264,000 (S$360,000)-worth of gifts, which prosecutors said included cigars and champagne, from tycoons and dispensing favors in alleged bids for improved coverage by an Israeli newspaper and a website.

He could face up to 10 years in prison if convicted of bribery and a maximum 3-year term for fraud and breach of trust.

Israel's shekel weakened against the dollar on the news. It was trading at 3.63 per dollar at 1620 GMT, from 3.6240 before the announcement and down 0.4 per cent versus the US currency from Wednesday.

At the hearing with Mandelblit, the 69-year-old Netanyahu can cite the public interest in arguing against an indictment. In his statement on Thursday, the prime minister touted what he has achieved for the country: noting the strong economy and ties with world powers that he has cultivated over the last decade.

"This is not to be taken for granted," he said.

Netanyahu would be under no legal requirement to resign, even if indicted. But if he were re-elected it would likely be to lead a coalition, as he does now, and if he were indicted, public pressure could buckle the necessary alliances.

Gantz said on Thursday he would not join Netanyahu in any future coalition government given the possible corruption indictment, and called on the prime minister to step down.

Yohanan Plesner, president of the non-partisan Israel Democracy Institute, said he did not expect a dramatic shift in public opinion against Netanyahu.

"However, since the elections are such a close call, even a movement of few percentage points in either direction can make the difference between Netanyahu winning as prime minister - or his main challenger, Mr. Benny Gantz," said Plesner.

Netanyahu's supporters generally back his hawkish stands on Iran and the Palestinians, credit him for the strong economy and greatly admire his command of English and international standing.

Many of his opponents see him as a divisive leader whose alliance with the far-right has harmed democracy and made any prospect of peace with the Palestinians even more remote.

Anshel Pfeffer, author of a recent Netanyahu biography, said on Twitter that Israel was entering "uncharted waters" in which "no one has any idea how being a prime minister under notice of indictment will effect Netanyahu and his government".

US President Donald Trump, asked at a news conference earlier on Thursday about Netanyahu's legal troubles, voiced support for the Israeli leader. Trump and Netanyahu have been in lockstep over policy toward Iran and the Palestinians.

"Well, I just think he has been a great prime minister," said Trump.

US-brokered peace talks between Israel and the Palestinians collapsed in 2014 and the Trump administration is expected to unveil a new peace plan after the Israeli election.

The Palestinian leadership did not immediately comment on the news of Netanyahu's pending indictment.

Sitting in a cafe in the city of Hebron, in the Israeli-occupied West Bank, 28-year-old Palestinian student Abdallah al-Razem said Netanyahu's legal predicament was in the interest of the Palestinian people.

But he added: "There is also corruption within our government ... I hope such a decision gets implemented here too."

Roy Slor, a 47-year-old Israeli who works with people with disabilities, watched the news on television in a Tel Aviv cafe.

"I think it's a very sad day for us in Israel. I was upset hearing the news," he said. "It's not an easy day when the prime minister is accused of these allegations."