British ultra runner Jasmin Paris has become the first woman to win the 268-mile Montane Spine Race - while also expressing breast milk for her daughter at checkpoints along the way.

Paris, 35, who lives in Edinburgh, dominated a gruelling race, from Derbyshire in central England to the Scottish border, crossing the finish line in 83 hours, 12 minutes and 23 seconds.

The 35-year-old shattered the course record by 12 hours.

"It is really tough. Two thirds of the time it is dark and it is completely different from any race I've run before because it is non-stop," she told BBC Breakfast. 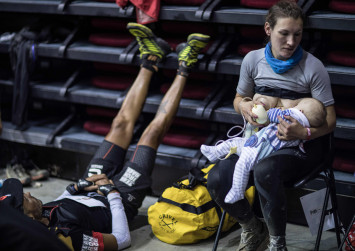 "You have the whole challenge of when to sleep and that becomes very tactical, and then you're sleep-deprived.

"When I was on the final section I kept seeing animals appearing out of every rock and kept forgetting what I was doing - hallucinations. Every so often I'd come to with a start."

Paris's husband met her at every aid station on the route so that she could use a breast pump to express milk for her 14-month-old daughter Rowan.

"She (Rowan) was very bemused to see me on the finish line and has been very clingy today as if she is thinking I might go away again," Paris added.