Ms Kim Yo Jong's close assistance and "odd jobs" stress her position as an important figure for the North Korean regime, experts say.

HANOI - While every movement of North Korean leader Kim Jong Un is being watched by the world, his sister's close assistance has caught the public's attention.

As one of the most powerful figures in North Korea, Ms Kim Yo Jong stands next to her brother in all engagements and has been spotted inspecting the venue of the second Trump-Kim summit in Hanoi and holding an ashtray for her brother.

When the North Korean leader departed Pyongyang for Hanoi last Saturday (Feb 23) afternoon for the Wednesday and Thursday (Feb 27 and 28) summit with United States President Donald Trump, Ms Kim stood next to her brother.

She was also spotted carefully assisting Mr Kim as he took a smoking break before arriving in Vietnam. A habitual smoker, Mr Kim was spotted smoking at Nanning Station in China in footage taken by Japanese TBS TV. There, Ms Kim stood next to him and held the ashtray.

So much scrutiny on how Kim Jong Un lights up his cigarette. One SKorean anthropologist calls it the Russian style, because Kim strikes his match inward rather than outward. During Cold War, some Russians believed they could tell US spies by examining how they smoked, he says. pic.twitter.com/ih6SNd19Lz

At Dong Dang Station in Vietnam and at the North Korean Embassy in Hanoi on Tuesday, Ms Kim showed up first before her brother and checked the environs.

When the two leaders strolled through the hotel garden between talks sessions on Thursday, echoing a break they took at their first summit in Singapore, in the background was Ms Kim, who has displayed a repeated ability to appear in summit images of her brother in both Singapore and at inter-Korean meetings in Panmunjom, the truce village in the Demilitarised Zone that divides the peninsula.

She peered around a pillar, before lurking behind a large potted plant as the men stopped to chat, joined by a smiling US Secretary of State Mike Pompeo and Mr Kim's right-hand man Kim Yong Chol.

On her close assistance and "odd jobs", experts say it stresses her position as an important figure for the North Korean regime. She is director of the Propaganda and Agitation Department of the Workers' Party of Korea. 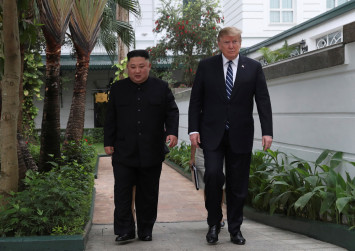 "It is more natural for Kim's sister to hold the ashtray than for others to do it. If it was another person, it could be interpreted as trying to flatter the leader," Mr Jeong said in a radio interview on Wednesday.

Pundits say it is very important for the North to limit access to anything that could possibly reveal information about Mr Kim's health, and that collecting the cigarette butts is an important task.

According to sources, North Korea is making sure to collect everything that Mr Kim has used, such as tissues and towels. Mr Kim is also said to bring along his own toilet when he travels.