At least 7 dead as World War II plane crashes in the US: Reports

At least seven people were killed when a World War II bomber carrying 13 passengers and crew crashed at an airport in the northeastern US state of Connecticut Wednesday, local media reported.

The Boeing B-17 aircraft, which the US Air Force deployed against Germany and Japan, crashed at Bradley International Airport while trying to land around 10:00 am (1400 GMT).

Ten passengers and three crew were on the aircraft, which was operated by the Collings Foundation, a group catering to aviation buffs who pay to experience vintage planes, officials said.

James Rovella, a Connecticut state disaster emergency official, told a news conference that there had been fatalities but added it was too early to say the exact number.

"Burn victims are very difficult to identify. We don't want to make a mistake," he said.

A maintenance officer working on the ground was also injured, Rovella added.

Local media later cited officials as saying that the crash left at least seven dead and nine injured, including three people who were on the ground at the time.

Ten minutes after the flight took off at 9:45 am, the pilots radioed the control tower to say they were experiencing problems, said Kevin Dillon, director of the state's airport authority. 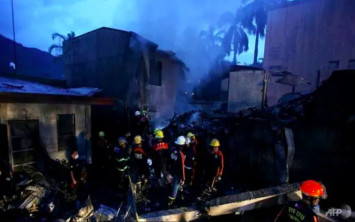 "We could see they could not gain altitude. Upon touchdown they obviously lost control, struck our de-icing facility here as well as a maintenance facility," he told reporters.

A spokesman for Hartford Hospital, situated 15 miles (25 kilometers) from the airport, told AFP the facility had received six patients, three of whom were critical.

It was not immediately clear what caused the crash.

According to excerpts of a cockpit conversation reported by several news outlets, the pilot had asked the control tower for permission to land urgently because of an engine problem.

Photos circulating on social media and carried by US media outlets showed a thick black plume of smoke billowing from the crash site.

Connecticut Senator Richard Blumenthal said the plane was one of only 18 B-17s left in the country, and that the crash might have implications for the flying of vintage aircraft.

"If there were defects or improper maintenance as a cause, it is a very strong red flashing light for others who are flying these planes," he said.

The airport was closed for several hours before later reopening.