Amateur footage broadcast on television showed the animal, held on a lead by a lion tamer, pouncing suddenly on the child.

MOSCOW - A circus lion pounced on a four-year-old girl, ripping its claws into her face, during a show in southern Russia that was intended for young children, officials said on Monday (Oct 29).

The girl has been hospitalised for treatment of her injuries, said the Investigative Committee, which is probing Sunday's (Oct 28) incident.

The incident occurred at a show in Uspenskoye village in Krasnodar region some 1,250km south of Moscow.

Amateur footage broadcast on television showed the animal, held on a lead by a lion tamer, pouncing suddenly on the child.

Such attacks are a regular occurrence in Russia, where acts using wild animals remain common and numerous poorly regulated circuses travel the provinces.

The Investigative Committee launched a probe into safety breaches at a performance intended for young children, and detained its director, who could face up to six years in prison.

Video footage showed only loose netting protecting the audience. The images also showed the girl standing near the ring, apparently with her back to the lioness. 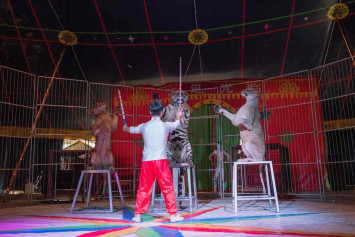 Officials said the girl was taken to a children's hospital in the regional capital of Krasnodar with lacerations to her face and other injuries.

A local official told RIA Novosti news agency that the lion did not bite the girl but lashed her with its paw.

Russian media named the circus involved as Mondial, based in the southern city of Rostov-on-Don.

During a circus show in Siberia in 2016, a leopard broke free and bit a woman.

In 2012, a cheetah gored a seven-year-old boy in the face and neck in the Moscow region.

The same year, a tiger at a travelling zoo clawed a three-year-old boy in the head in far eastern Russia.