Living under fire in Israel, when the rocket shelter becomes your home

ASHKELON, Israel - Standing over his baby's cot in the whitewashed glare of an Israeli rocket shelter, Natanel Sharvit spends his days killing time. If he risks going outside, the alternative could be far worse.

He and his family live under the near-constant threat of rocket attacks launched by Hamas and Islamic Jihad from the Gaza Strip, just 12 miles (19 km) from their home in the Israeli coastal city of Ashkelon.

Sharvit, his wife and four children are no more in control of the air war raging above their heads than Palestinian civilians living on the other side of the Israeli military barrier that separates north Gaza from southern Israel. All they can do is wait, and hope for a return to something like normality.

"We are in this situation for many years now, almost 20 years. I don't know exactly how long," Sharvit, 30, told Reuters. "We don't leave the shelter, playing here, trying to kill time as much as possible and hoping it will be OK."

The fortified "safe" room is a mandatory feature for all new homes in Israel, but older buildings do not have them.

Moshe Loutati, 44, hides his eight children under the staircase when the red alert sirens sound, because they don't have a fortified room in their third-floor apartment in Ashkelon.

"There is nowhere to run to. The shelter is very far away and neglected and we can't put eight children in a neglected shelter," he said.

Hamas, the Islamist group that rules Gaza, launched the latest round of rocket attacks last Monday (May 10), after widespread Palestinian anger at threatened evictions of families from East Jerusalem, and Israeli police clashes with worshippers near Al-Aqsa Mosque, Islam's third holiest site.

Gaza medical officials say 215 Palestinians have been killed, including 61 children, and more than 1,400 wounded.

Israeli authorities say 12 people have been killed in Israel, including two children. 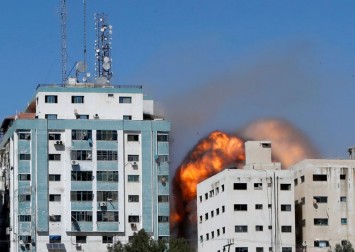 Israel says its air and artillery strikes on Gaza will continue as long as necessary to destroy Hamas military sites and kill its leaders.

But Israeli military spokesman Lieutenant Colonel Jonathan Conricus said on Tuesday that even with the intensive bombardment, Hamas and other militant groups had thousands of rockets and mortars.

"It is very difficult to degrade all of those rockets and to interdict or otherwise destroy them. They are very dispersed," he said.

Israeli police spokesman Micky Rosenfeld said that while Israel's Iron Dome missile defence system was intercepting the majority of rockets launched into Israeli territory, "if 120 rockets, or over 50 - 60 rockets are fired into those populated areas, there is still a percentage of rockets that will make their way through." That, he said, was the reason it was "absolutely critical" for Israelis to remain vigilant and go into their safe areas.

But after more than a week of the most intensive bombardment ever from Gaza, residents of cities like Ashkelon simply seek respite.

"We want a safe place and we want all this war to stop," said Jacqueline Mashiach-Zaghel. "Every place now is not safe. You go to Tel Aviv? You go to Ashdod? What, I will leave my home and run away?"