Fully grown tigers like this Sumatran female with her two cubs, pictured in San Diego Zoo in 2012, are a common sight at lavish parties in the Hollywood Hills.

Los Angeles on Tuesday banned the exploitation of exotic animals for entertainment purposes, effectively ending the lavish Hollywood parties where giraffes, tigers and even elephants are used to amuse guests.

"The issue of wild, exotic animals being abused came to my doorstep four years ago, when a baby giraffe and elephant were being marched up the Hollywood Hills for a house party," said city councilman David Ryu, who led the push for reform that his colleagues approved unanimously.

"This is beyond unacceptable, and we must end it," he added.

"It is time that the City of Los Angeles takes action to make clear that treating animals in this way is not in line with our city's values."

The issue of wild animals being brought to parties at luxurious homes in the Hollywood Hills has been a problem for years, Ryu's office said, with neighbours often complaining about noise and massive crowds.

A new ordinance, which needs to be approved by the mayor of Los Angeles, prohibits the use of wild or exotic animals at house parties and other live entertainment.

It also bans people from riding wild or exotic animals for entertainment purposes.

But it will not affect Los Angeles Zoo, which can still exhibit wild animals for educational purposes.

There is already a statewide ban on circuses using wild animals.

The law was backed by several animal welfare groups, including People for the Ethical Treatment of Animals (PETA) and the Performing Animal Welfare Society (PAWS) which rescues and cares for animals retired from the entertainment industry. 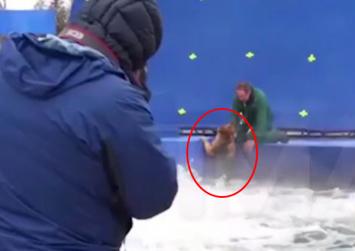 "Using petrified penguins, bewildered big cats, and other wild animals as party props sentences sensitive animals to miserable, deprived lives in chains, cages and trailers, and can endanger partygoers when the animals get spooked," PETA official Rachel Mathews said in a statement.

"PETA supported this progressive ban every step of the way, and we look forward to seeing the lights go out on the days of dragging bears, giraffes, elephants, and lions to house parties."