Love speaks through glass panes at US coronavirus facility

Dorothy Campbell waves while talking through a window to Gene Campbell, her husband of more than 60 years, at the Life Care Center of Kirkland, the long-term care facility linked to several confirmed coronavirus cases in the state, in Kirkland, Washington, US on Thursday.

Gene and Dorothy Campbell, who tied the knot 65 years ago, turned 89 and 88 respectively this week.

Gene has been in the nursing home since Feb. 21 after suffering from a stroke, said his son Todd, 59, an industrial engineer.

But in late February the Seattle-area facility was locked down after seven residents died as a result of coronavirus.

Accompanied by Todd and the couple's other son, Charlie, Dorothy visited her husband at the nursing home this week.

To avoid the risk of infection, they chatted on the phone while looking at each other through the window.

Reuters photographer David Ryder met the brothers on Wednesday, and a day later saw them escorting their mother, a retired schoolteacher, toward the window where Gene, a former textbook distributor, was waiting.

The couple had been living together at an assisted facility in Bothell, Washington.

"I was prepared for something like that because I figured it would be an emotional moment," Ryder said.

"They were laughing and smiling and seemed to be in good spirits. They were handling it with incredible grace, all things considered." 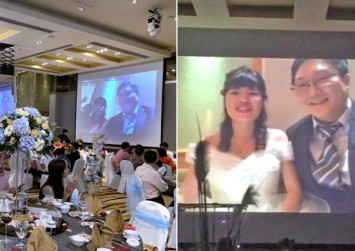 Gene is awaiting the results of tests to see if he has contracted the virus, his son said.

He has shown some symptoms that are consistent with the coronavirus, including a cough and low grade fever, said Charlie, 61, a retired nephrology nurse.

After being moved on Friday to Swedish Edmonds Campus, a hospital about a half-hour drive away, Gene's blood was drawn for tests, with results expected in 48-72 hours, Charlie said.