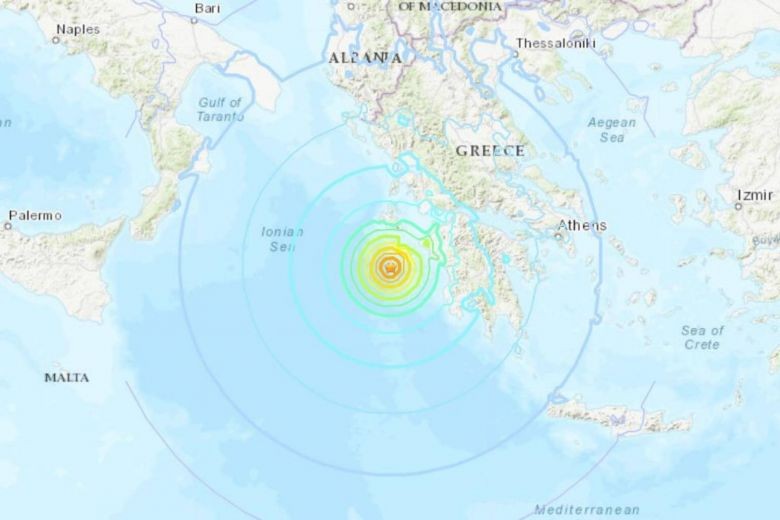 ATHENS - A strong quake of magnitude 6.8 struck off Greece early on Friday (Oct 26), the US Geological Survey said, with local media reporting damage caused by landslides and electricity outages.

The epicentre of the quake, initially reported as a magnitude 7.0, was in the Ionian Sea, some 133.5km south-west of Patras in the Peloponnese.

The quake was fairly shallow, only 16.5km below the seabed, which would have amplified shaking. It struck at 1.54am (6.54am Singapore time) and was followed about half an hour later by a 5.2 aftershock.

The tremor was felt in Greece's capital, Athens, and as far away as Italy. The Athens earthquake observatory said the tremor was felt strongly in Zante, a popular holiday destination with its own international airport.

"It was strong, things fell of the shelves," a witness in Katastari, Greece, 36km north of the epicentre, wrote on the European-Mediterranean Seismological Centre (EMSC) website.

Soon after the quake there were only 3 postings on the EMSC testimonials page, which is unusual for a quake of such magnitude.

Attention was focused on the island of Zakynthos, where reports indicated power was out. Local news websites reported that a 15th century monastery in the Strofades area of the island had been damaged.

Firefighters in Sicily, Calabria and Puglia received thousands of telephone calls for information about the quake.

Greece's Geodynamic Institute reported a tremor of 6.4, 50km south of Zakynthos. An official there confirmed a tsunami alert had been issued, which is standard for tremors over 5.5.