The man was confronted by a cathedral security officer and later apprehended by police.

When the man entered the Midtown Manhattan church he was confronted by a cathedral security officer, a New York City Police Department (NYPD) spokesman said.

The man then left the cathedral and was apprehended by police, John Miller, deputy commissioner of intelligence and counterterrorism for the NYPD, told a press briefing.

The official noted the incident came two days after the much-publicised fire in Paris' Notre-Dame Cathedral. 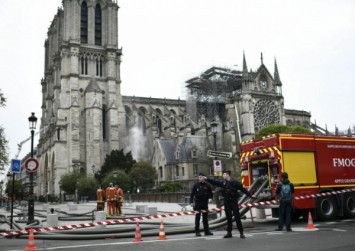 "This is an indicator of something that would be very suspicious," Miller told reporters outside the cathedral.

Three predominantly black churches in Louisiana were burned down between March 26 and April 4.

The man told police he was carrying the gas cans because his vehicle had run out of fuel. When police checked the vehicle they found it was not out of gasoline, at which point the man was arrested, Miller said.

The man is "known to police," he added. Police are still trying to ascertain the man's "mindset" and motives, Miller said.