PARIS - A French celebrity chef, who is suing the Michelin guide for suggesting he used cheddar cheese in a souffle, was named as one of the 10 immortals of haute cuisine by the rival Gault & Millau guide.

Marc Veyrat was given a permanent place in the new academy of the "Golden Toque" alongside Guy Savoy, Alain Passard, Alain Ducasse and other legends of French cuisine.

The news was seen as a swipe at its arch rival Michelin, which has been accused by Veyrat of "dishonouring" him by stripping him of his coveted third star in January.

The chef - a larger than life figure instantly recognisable for his wide-brimmed black Savoyard hat and dark glasses - is taking the guide to court later this month to try to force Michelin to hand over its inspectors' notes.

Gault & Millau announced its new academy featuring the 10 pillars of French cooking as it named Arnaud Donckele as its chef of the year. 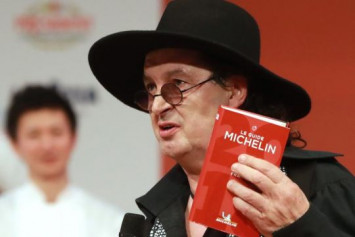 It described his cooking at La Vague d'Or restaurant in the chic French Riviera resort of Saint Tropez as poetry on a plate.

While the prize is usually given to emerging chefs, the 42-year-old is already a big name, holding the maximum three Michelin stars.

Donckele, who is set to open Le Cheval Blanc restaurant in Paris next year, told AFP that his cooking is "complex" but also designed to please everyone.