Melania Trump in the limelight - briefly 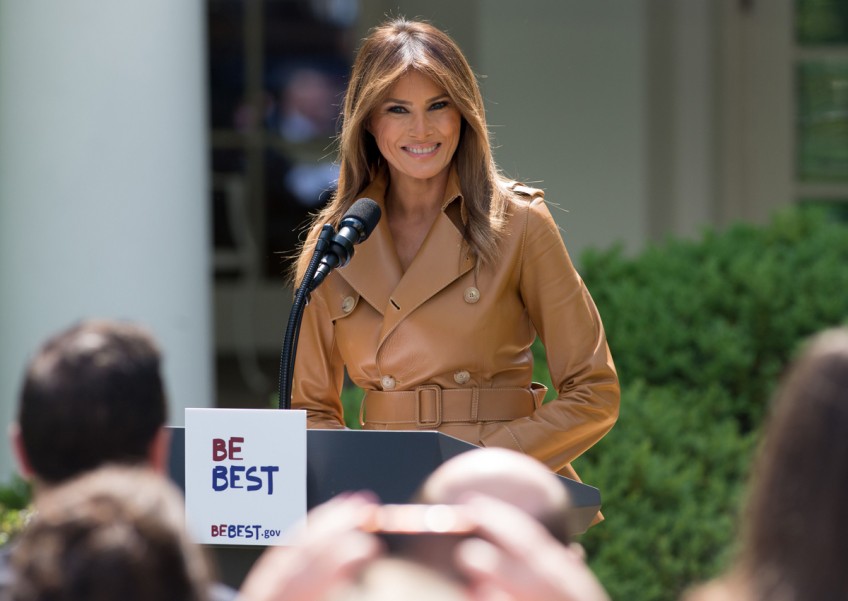 Melania Trump, until now seemingly more comfortable outside the media glare, briefly stepped into the spotlight Monday to unveil the focus of her work as first lady -- an awareness campaign aimed at helping children.

As her predecessors did before her -- Laura Bush chose illiteracy, Michelle Obama promoted healthy eating and the fight against obesity -- the wife of Donald Trump has chosen a cause to champion.

At a carefully choreographed Rose Garden ceremony, the 48-year-old Slovenian former model warned against what she called the ways social media can "too often" be used negatively against children.

"It is our responsibility as adults to educate and remind them that when they are using their voices, whether verbally or online, they must choose their words wisely and speak with respect and compassion," the first lady said.

"When children learn positive online behaviours early on, social media can be used in productive ways and can effect positive change."

The US president -- known for mocking his opponents on Twitter, and even launching an insult or two -- sat in the front row, in front of several dozen children invited to the White House for the occasion.

"As a mother and first lady, it concerns me that in today's fast-paced and ever connected world, children can be less prepared to express or manage their emotions and oftentimes turn to forms of destructive or addictive behaviour," she said.

Popularity on the rise

The event reinforced the image of a first lady who is learning the ropes and getting more comfortable in her role -- but in parallel with her husband. The couple's interactions in public are limited.

Her popularity rating has been on the rise since her husband took office more than 15 months ago.

According to a CNN/SSRS poll published Monday, 57 per cent of Americans have a favourable opinion of the first lady -- a big jump from January, when she enjoyed 47 per cent support.

In a country that is increasingly politically polarised, her approval rating with Democratic voters is even more impressive, jumping by 15 percentage points (among them, positive and negative opinion is now equally divided).

Melania's approval rating is nevertheless lower than that of Michelle Obama at the same point in Barack Obama's presidency.

At the conclusion of the Rose Garden ceremony, and after a brief embrace with his wife, Donald Trump took the microphone to praise the "truly beautiful and heartfelt speech" of his wife.

"Everywhere she has gone, Americans have been touched by her sincerity," he said.

Brigitte Macron, the wife of the French president, said after her visit with Melania that the US first lady was "someone who has a strong personality, but she makes an effort to hide it."

In presenting her new initiative, Melania has more clearly embraced the traditional role of first lady, which thus far she seemed to accept with hesitation. But for now, she still hasn't shown all her cards.