A couple from Melbourne, Australia, found two needles in grapes they bought from a supermarket on Tuesday (Jan 1).

Mr Hasa had bought the bag of seedless green grapes from an outlet of Australian supermarket Woolsworths located in their suburb Craigieburn.

Ms Alsubaiy discovered the needles when she pricked her finger while picking up a grape after dinner.

"When we cut it open, there was a needle stuck through it," Mr Hasa told 9 News.

The pair found two needles after cutting open every grape in the bag. 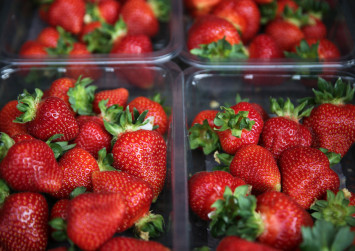 Ms Alsubaiy, who is pregnant, was thankful she had not eaten the needle by accident.

She said: "I thank God I didn't eat them. I'm pregnant, and I don't want anything to happen."

Australian police confirmed that they are investigating the incident.

"All contamination reports referred to police will be investigated thoroughly, with the safety and well-being of the public at the forefront of our minds," the police said in a statement to news.com.au.

The police urged people to report any similar cases of fruit contamination.

They also warned that anyone found contaminating food products can be charged with a serious indictable offence, with penalties of up to 10 years in jail.

Woolsworths said in a statement: "We're aware of the customer report and will work closely with the authorities as they investigate this matter."

This incident comes after hundreds of cases of needles found in Australian strawberries in September last year.

Pins and needles were found stuck into the fruit, leading supermarkets to pull boxes from shelves across Australia and New Zealand, and forcing farmers to dump crops.