A Somali-born Australian who carried out a deadly knife rampage in Melbourne held extremist views and was known to intelligence services, authorities said Saturday, as they carried out raids and interviewed dozens of witnesses.

Australian Federal Police said 30-year-old Hassan Khalif Shire Ali -- who was shot dead after driving a 4x4 laden with gas cylinders into the city centre and stabbing three people -- fled to Australia as a child with his family in the 1980s.

He stabbed three people before being confronted by members of the public and armed officers who eventually shot him in the chest. One of his victims died at the scene while two others were wounded.

Authorities have questioned around 35 people who saw the rush hour attack, which although crude, was said to have been designed to "cause terror and cause maximum casualties" in the heart Australia's bustling second city.

Armed officers raided two addresses in the west and northeast of the city, linked to the perpetrator's family and associates, although there is not thought to be an ongoing threat.

The man killed by Shire Ali was named by local media as 74-year-old Sisto Malaspina, an icon of Melbourne's thriving culinary culture who ran a famous Italian cafe.

Two other men wounded in the attack are still being treated but are expected to make a recovery.

Australian authorities now face difficult questions about how Shire Ali, who was known to the Australian Security Intelligence Organisation for at least three years, was able to carry out an attack.

He had his Australian passport revoked in 2015 amid fears he was trying to travel to Syria to join the Islamic State group.

His brother will go on trial next year on separate terror-related charges -- accused of trying to acquire a firearm and kill people in a New Years' Eve crowd. 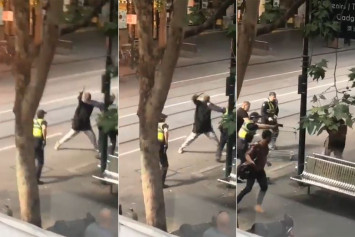 "The assessment was made that whilst he had radicalised views he didn't pose a threat to the national security environment," Ian Mccartney, a federal police counterterrorism official said of Shire Ali.

Mccartney described the attack as a "wake up call" even as the Islamic State loses territory in Iraq and Syria, where Australian forces are part of a coalition fighting the group.

"The circumstances of how he and when he moved from having these radicalised views to carrying out this attack yesterday will be a key focus of the investigation," Mccartney added.

The Islamic State group -- which often claims responsibility for such attacks -- said via its propaganda arm that the perpetrator was an "Islamic State fighter and carried out the operation."

It provided no evidence to back its claim.

Witness footage showed police struggling for at least a minute to corral the towering man as he lunged, slashed and stabbed wildly at two officers.

At least two members of the public stepped in to help police. One man was armed with a cafe chair while another -- swiftly dubbed an "Aussie hero" on social media -- repeatedly tried to ram the suspect with an empty metal shopping cart.

But the attacks continued unabated before one officer opted for lethal force, shooting the suspect in the chest.

"Once the officer is off the view that there is an imminent threat to life," he added. "That is when firearms are drawn."

Witness Chris Newport, 60, described how he had been returning from a job interview when he heard a loud noise and saw a truck on fire, rolling across the tram tracks before a second, louder bang.

"In a split second everything changes" Newport told AFP, describing Shire Ali manically brandishing a knife. "You can't imagine someone deciding to do that."

Police said that his improvised explosive device was made up of gas cylinders and some form of lighter and "certainly wasn't sophisticated".

Australian Prime Minister Scott Morrison said the country would be unflinching in the fight against "radical, violent... extremist Islam that opposes our very way of life".

Shire Ali "sought to instill fear in our nation. Like those who tried before him, this terrorist failed," he said.

He cited more than a dozen foiled terror plots as evidence that Australians could have faith in their counterterrorism authorities.

Friday's attack was a double blow for the city as it coincides with an ongoing murder trial of 28-year-old James Gargasoulas, accused of ploughing his car into crowds in the same area in 2017, killing six people. The motives for that attack are still unclear.