Relatives and friends of the two priests Javier Campos and Joaquin Mora who were murdered, attend a mass after Mexican authorities said that they are searching for their bodies along with others who were kidnapped in a violent stretch of northern Mexico, at San Ignacio de Loyola church in Mexico City, Mexico, on June 21, 2022.

MEXICO CITY - Mexican authorities said on Tuesday (June 21) that they are searching for the bodies of three people, including two Jesuit priests, as well as four people who were kidnapped in a violent stretch of northern Mexico.

The state prosecutor's office in Chihuahua, along the US border, said in a statement that it received a report on Monday that three people were killed in the town of Cerocahui after a man took refuge in a church to protect himself from an attack.

Authorities later said the man, identified as a tour guide, was "taken" to the church.

"They entered the church, chased a person and murdered him. Apparently the priests came out and they were also killed," President Andres Manuel Lopez Obrador told reporters on Tuesday during his regular morning news conference, after he was asked about the killings.

The bodies of the three were then taken away by a group of men in the back of a pickup truck, Luis Gerardo Moro, head of the Jesuits in Mexico, said in a radio interview.

Moro said the Jesuits were hoping to hear from Pope Francis about the situation, and that two priests remained at the church in the small town in the Sierra Tarahumara mountain chain, home to the Raramuri indigenous group and increasing cartel violence. 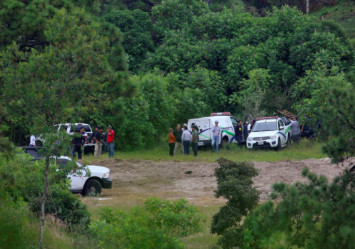 State authorities said the murders followed a 911 call in the same town on Monday morning reporting the kidnapping of two men, a woman and a child, who are still missing.

The four tourists were kidnapped from a hotel in the town, a police source who asked not to be identified told Reuters.

The federal security ministry said on Tuesday afternoon that a suspect in the murders had been identified.

"The investigation is advancing, and I assure you all that we will take this to the ultimate consequences," the state's governor, Maria Eugenia Campos, said during a Tuesday news conference.