An employee of the clothing brand "El Chapo 701," owned by Alejandrina Gisselle Guzman, daughter of the convicted drug kingpin Joaquin "El Chapo" Guzman, hands out a box with food, face masks and hand sanitizers to an elderly woman as part of a campaign to help cash-strapped elderly people during the coronavirus disease (Covid-19) outbreak, in Guadalajara, Mexico, April 16, 2020.

"These criminal organisations that have been seen distributing the packages, this isn't helpful. What helps is them stopping their bad deeds," he told reporters at a news conference.

The leftist president, who has advocated a less confrontational approach than his predecessors to taming raging cartel violence, said gang members should refrain from harming others and instead think of the suffering they cause to their own families and the mothers of their victims.

Mexico notched a homicide record of 34,582 dead during Lopez Obrador's first full year in office in 2019, as the president advocated for more social spending to address the root causes of crime.

A daughter of jailed drug lord Joaquin "El Chapo" Guzman was among those spotted handing out the packages stamped with her own company's "El Chapo 701" logo, which includes the image of her infamous father. 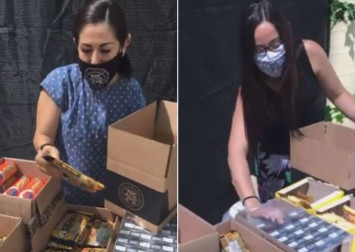 Beyond the Guzman-linked Sinaloa Cartel, other gangs have similarly courted publicity with care packages for mostly poor residents, including the Jalisco New Generation and Los Durango cartels.

Photos posted on social media on Monday showed heavily armed members from both handing out packages including toilet paper and shampoo.

Lopez Obrador, meanwhile, has come under sharp criticism for not advocating more financial support for companies or jobless workers.

Over the past month, the country's economy has dramatically slowed due to coronavirus containment measures.

To date, there are more than 8,000 confirmed coronavirus cases as well as nearly 700 deaths attributed to Covid-19, the respiratory disease caused by the virus.