Rescures work among the rubble and wreckages of the Morandi motorway bridge two days after a section collapsed in Genoa on August 16, 2018.

ROME - An Italian mother related on Thursday (Aug 16) how she was out shopping when an enormous piece of concrete from the collapsing Genoa bridge hit the store she was in, trapping her and leaving her daughter entombed beneath the rubble.

"I was buried up to my chest, and my daughter was completely buried. I fainted several times, Marina Guagliata, 58, told Italian media from her hospital bed, calling her rescue "miraculous".

Guagliata was out with her daughter Camilla, 24, on Tuesday (Aug 14) when the Morandi Bridge crumbled.

She said they were browsing at the "Fabbrica del Riciclo", a second hand shop located just below the bridge, when out of nowhere the massive piece of debris hit the store.

Both then found themselves trapped by the rubble that had descended on the shop. 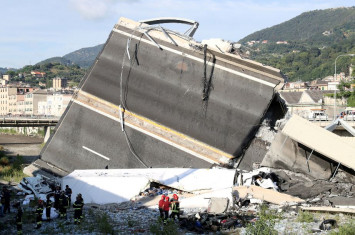 "I could breathe as my face was free, but Camilla was underneath, covered. I couldn't see her but I knew that she was there," Guagliata said, her voice shaking.

"I managed to touch her hand and face and remove debris from her mouth." Medical staff have had to shave half of her head, but she is grateful to her rescuers and remembers how she "kept screaming, asking for help".

Eventually firefighters arrived, but from that point Guagliata says she can only remember asking them to save her daughter first, before waking up in her hospital bed.

Her daughter is in a stable condition in another wing of the hospital but faces a long recuperation to recover from a crushed leg, fractures to her pelvis, ribs and an arm, as well as a punctured lung.

It was Camilla who had to reveal to her mother what had actually happened, telling her that "we heard a roar, looked out of the window and screamed".

The two women are among the 15 injured in the collapse of the viaduct, in which 38 people are known to have died with more deaths expected to be confirmed once rescue efforts are completed.