Brazil knocked out Mexico on Monday (July 2) to advance to the quarter-finals of the 2018 World Cup, held in Russia.

But the game was overshadowed by the reaction, or rather, 'overreaction' by Neymar when Mexico player Miguel Layun stepped on the Brazilian football star's ankle.

The Neymar Drama as it unfolded. #NeverForget pic.twitter.com/qfUPOPb3VC

Neymar's dramatic, and some would say excellent, 'acting skills' was called out by World Cup fans and former football stars.

Neymar has the lowest pain threshold of any player in World Cups since Opta stats began.

Here's Neymar's ankle getting stepped on before he died from the injury and was resurrected pic.twitter.com/4BKcrzT9sz

Here are some of the best ones:

I just waved at Neymar

Considering the amount of time Neymar has been rolling about the pitch... There should be about 91 minutes injury time in this game #BRAMEX

Even former French football legend Eric Cantona got in on the action prior to the Brazil-Mexico game, calling him a 'great player', and also a 'great actor'.

And then there's this:

And one where he just keeps rolling... and rolling.

Neymar has been heavily criticised, especially by British football fans, for diving, rolling and exaggerating fouls.

For the uninitiated, here's how to spot a dive, courtesy of AFP Sport:

But the 26-year-old has come out to defend himself, saying: "I think it's more an attempt to undermine me than anything else."

Some fans have also said it's unfair to pick on Neymar when Brazil was clearly the better side.

Mexico was outplayed. To blame neymar is to distract from their performance.

Former Brazil striker Ronaldo came out in support of his countryman on Wednesday (July 4) as criticism mounted against the pundits who have condemned his diving but ignored the fakery of other players.

Read Also
Photos: Meet the hunks of the World Cup 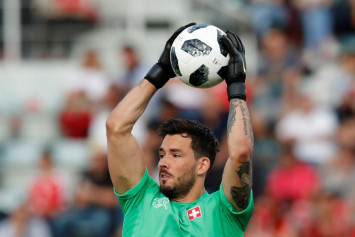 Ronaldo said Neymar - who is one of the most fouled players in the entire tournament - needed more protecting.

"I am against all these opinions (on Neymar acting). He is an intelligent player in his movements and on how to defend himself from being tackled. I don't think referees have been protecting him enough.

Watch the replay, he clearly stomps on Neymar's shin while Neymar is down. Should have been a red.

That said, all eyes will definitely be on Neymar when Brazil next plays Belgium in the quarter-final match on Friday 2pm ET (2am Saturday, Singapore time). But for regular fans wanting an exciting match this weekend, just keep the goals (and not players) rollin' in.