TORONTO - The van that killed 10 in Toronto on Monday plowed through the heart of a vibrant Korean community in Canada's largest city, barreling past a cluster of Korean restaurants, a grocery store and a popular street vendor that sells red bean waffles shaped like fish and other Korean treats.

Among the dead was Chul-min "Eddie" Kang, 40, a chef with a local restaurant chain, local media reported. Toronto's Korea Times Daily reported that another victim was an international student.

On Wednesday, authorities in Toronto worked to formally identify victims, a process they have said will take a number of days. Local news media reported that Renuka Amarasingha, an employee with a local school board and a single mother, grandmother Dorothy Sewell, and Anne Marie D'Amico, an employee of asset manager Invesco Canada, had died. 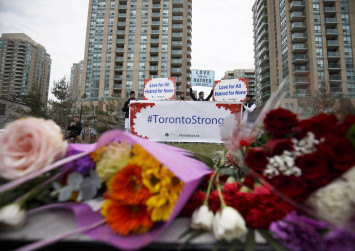 June Hur, who works at a local library, said the area around Yonge Street and Finch Avenue is increasingly thought of as the city's new Koreatown. An older Korean neighborhood, which dates back to the 1970s, is located in the city's downtown.

"To see such violence happen right in that area, it just feels like something was stolen from us," said Hur, after visiting the site on Tuesday. Standing on the street, she said, her knees felt weak.

Oh Seong Kim was in his second-floor salon Monday afternoon when he heard loud thunks, ran to the window and saw six or seven bodies on the ground as the van hurtled down the sidewalk.

He watched the van hit a young woman who worked at a Korean food cart, he said - "a very good person," he said, someone he would see often when she came in to use the washroom but whose name he did not know. Reuters could not confirm her name or condition.

Kim froze, he said. Hours later he lay awake in bed, and every time he closed his eyes, he returned to the scene. He has worked in the area for a quarter century.

"It's a good community. Everybody gets together and helps," he said.

In the wake of the attack, a tarp covered a body outside Ssam, a Korean barbecue restaurant just north of the food stall. None of the staff were hurt, but by coincidence manager Jay Kang shares a Korean given name with one of the victims.

"I got a lot of phone calls that day," he said. "Everyone thought it was me, because I'm always in this area."

Kang said the neighborhood was very quiet on Wednesday. He expects it to stay that way for several weeks, but "it's not the important thing right now." 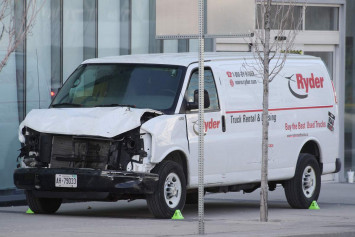 According to Canada's 2016 census, about two-thirds of the people in that Willowdale district where the attack took place have a first language other than English or French. More than 10,000 people out of close to 118,000 surveyed identified Korean as their first language.

"I can't believe this horrible incident happened in our community," said Hanna Lim, a Korean-Canadian who used to live near Yonge and Finch and still has friends there.

"This used to be a really nice area very cheerful, bright, full of Korean, Chinese people. Now look at this: It's empty."