You may have come across social media users over the past week attempting a complex hand gesture that looks like a cross between a salute and an 'OK' sign.

Far from being a cult or gang sign, this viral gesture is actually part of the #DeleAlliChallenge taking over the Internet, and is also guilty of twisting people's fingers into knots -- ours included.

It all started when English footballer and Tottenham Hotspur attacker Bamidele Jermaine Alli, better known as Dele Alli, celebrated his goal against rival team Newcastle in a match on Aug 11.

He made an odd salute by circling his eye with his thumb and index finger, then resting the remaining three fingers on his forehead. Intrigued, viewers and social media watchers soon followed.

Here's a useful guide for the clueless but curious on how to do it:

The trend even sparked a minor scandal, when Premier League club Manchester United's Jesse Lingard came forward, insisting that he was the originator of the fad.

Lingard took to Instagram to show evidence that it had all started back in June. His post showed a screenshot on a Whatsapp chat message sent by his friend challenging them perform the hand gesture.

As if the challenge -- which requires some finger dexterity and practise -- wasn't hard enough, the gesture has since evolved to a level only experts (or those with long fingers) can attempt.

In Twitter user Lexi Ceballos' version of the challenge posted on Aug 22, she uses four fingers contorted to form 'goggles' around the eyes, and #DeleAlliChallenge2.0 or #DeleAlliGoggleswas born. Her video has since gone viral, attracting more than 245,000 likes and 95,000 shares.

It was also replicated by Alli himself.

Curious? Here's how to do it:

A search on Instagram now yields more than 65,000 photos showing people around the world participating in the challenge, with varying degrees of success.

And you know it's a craze when even Crazy Rich Asians' lead actor Henry Golding and director Jon Chu were forced to have a go during an interview.

Although this intricate hand gesture seems like a recent fad, it has actually been around for quite awhile.

It is a variation of "finger tutting" -- a dance involving complex movements of the fingers -- which has been around since the 90s.

The term "tutting" is a genre of street dance consisting of angular movements which are supposed to stylize the poses seen on relief sculptures in ancient Egypt, and actually got its name from King Tutankhamun, or "King Tut". 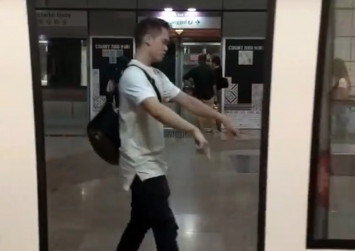 Finger tutting has also made its appearance in Taylor Swift's Shake It Off music video from 2014, where professional finger tutters (yes, it's a thing) performed it. 'Tay Tay' even attempted the choreography herself, hands-on (pun intended).

As with all fads, we're sure this too shall pass. But at least there's no harm in giving it a go, unlike some other challenges which have gone viral.