NEW YORK - A former New York nanny was sentenced to life behind bars on Monday (May 14) for murdering two young children in her care five years ago in a case that tormented parents worldwide.

Yoselyn Ortega, 56, killed six-year-old Lucia and two-year-old Leo with a kitchen knife in the bathroom of their affluent Upper West Side apartment on October 25, 2012.

On Monday, Judge Gregory Carro sentenced Ortega to the maximum penalty under the law - life in a state prison without the possibility of parole.

The prosecution said Ortega deliberately planned the murders and was motivated by financial problems and resentment of her wealthy employers.

"Leo and Lulu will never live the lives that laid ahead of them, and now their remorseless killer will live the rest of her life in prison," Manhattan District Attorney Cyrus Vance said.

Moments earlier, Ortega sobbed as she expressed remorse for the first time for the killings, asking for forgiveness from God and the children's parents but standing by her defence that she "did not feel well."

"I'm very sorry, but I hope that no one goes through what I have gone through," she said, her remarks in Spanish translated into English for the benefit of the New York State Supreme Court.

"I ask for a great deal of forgiveness - to God, to Marina, to Kevin," she said, wearing an oatmeal top and her dark hair scraped back into a pony tail.

Her lawyer said she suffers from psychosis, depression and heard voices telling her to kill the children.

"My client is severely ill, she is psychotic," Valerie Van Leer-Greenberg said, appealing for her to be placed in protective custody. 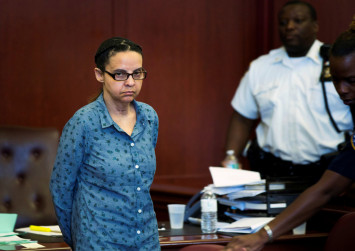 Marina Krim, 41, found her children dead in the bathtub after rushing home in a panic with her third child Nessie when she learned Ortega had not taken Lucia to her dance class as planned.

Ortega then took the knife to her own throat in an apparent suicide attempt. Lucia had sustained about 30 slashes to the body and neck, showing that she had tried to fight back.

The case shocked working parents and went on to inspire a best-selling French novel that explored the relationship between a working mother and the woman she hires to look after her young children.