NEW YORK - Actor Alec Baldwin on Wednesday agreed to take anger-management training, as he pleaded guilty in a Manhattan court to a harassment charge for a November confrontation in which he was accused of punching someone over a parking spot.

The 60-year-old actor, currently known for his impersonation of US President Donald Trump on NBC's "Saturday Night Live," pleaded guilty to second-degree harassment before a judge ordered him to pay a $120 fine and to return to court in March to show that he had completed the anger-management class.

When the judge asked Baldwin if he was pleading guilty and understood the conditions he replied, "yes sir."

Dressed in a dark business suit, burgundy-coloured scarf and eyeglasses, Baldwin did not speak to reporters before or after the hearing.

Police said Baldwin was arrested on Nov. 2 and charged with misdemeanour assault and harassment. He was released the same day and was met by a swarm of camera crews.

Officials did not name the other driver involved in the incident, but local media identified him as Wojciech Cieszkowski, a construction business owner. He told the New York Post one day after the altercation that he felt "sore," but was recovering after allegedly getting punched.

At the time, Baldwin denied striking anyone.

"Normally, I would not comment on something as egregiously misstated as today's story," a post on his foundation's Twitter account said after the incident. "However, the assertion that I punched anyone over a parking spot is false. I wanted to go on the record stating as much."

Baldwin won an Emmy Award in 2017 for his scathing impressions of Trump. He is also known for portraying network executive Jack Donaghy in NBC's "30 Rock" sitcom. 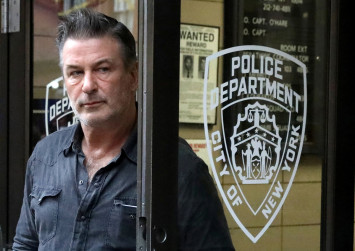 Baldwin has a history of losing his temper. In 2014, he was given a summons for disorderly conduct after an argument with police when he was stopped for riding his bike down a one-way street in New York. It was not clear what followed the summons notice.

In 2011, he was thrown off an American Airlines flight after refusing to stop playing a game on his phone before takeoff.

A year later, Baldwin denied punching a photographer who was trying to take photos of him with his then-fiancee and now wife, yoga teacher Hilaria Thomas.