WELLINGTON - A pair of New Zealand penguins that broke into a sushi stall at Wellington's busiest railway station have been returned to their natural habitat.

Police said they initially received a report about a little blue penguin in the city centre over the weekend and released the animal back into the harbour.

But it returned on Tuesday (July 16) with an accomplice and officers said the "waddling vagrants" started building a nest beneath a sushi stall at Wellington Railway Station, in the heart of the city.

After luring them out with salmon, the police again sent the seabirds back to the water, while wildlife officers sealed up the sushi stall's nooks and crannies to prevent any re-offending.

Department of Conservation manager Jack Mace said the birds were about to enter their breeding season and were searching for a safe spot "to set up shop to lay eggs later on". 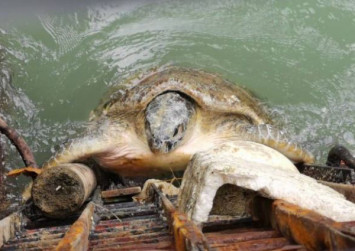 "We do get a few calls about them nesting under people's houses. That's quite a common one," he told TVNZ. "But certainly the busiest railway station in Wellington is an unusual one."

The persistent penguins would have crossed a busy highway to reach the train station, although Mace said they may have reached the sushi stand through freshwater pipes.

Little blue penguins are the smallest species of the flightless seabirds, standing 25cm tall and weighing about one kilogram.

Also known as fairy penguins, they are native to New Zealand but are listed as at-risk as development encroaches upon their environment, with dogs considered the main threat.

They are relatively common in Wellington but usually base themselves in colonies hidden away in rugged areas of coastline or on Matiu Island in the capital's harbour.