The USGS said the first quake hit 180km north-east of the city of Gisborne at 2.27am local time.

Thousands of New Zealanders forced to evacuate following a series of strong earthquakes in the area on Friday (March 5) can return home, authorities have said.

An 8.1-magnitude earthquake struck about 8.30am (local time) near the Kermadec Islands, some 800 kilometres off the northeast coast of New Zealand ’s North Island.

The National Emergency Management Authority urged New Zealanders in parts of the east coast of the North Island to evacuate due to the risk of a tsunami.

However, the largest waves had now passed and the threat level could be lowered, the authority said.

TSUNAMI WARNING issued following Kermadecs earthquake. People near coast from the BAY OF ISLANDS to WHANGAREI, from MATATA to TOLAGA BAY, and GREAT BARRIER ISLAND must MOVE IMMEDIATELY to nearest high ground, out of all tsunami evacuation zones, or as far inland as possible

“All people who evacuated can now return. The advice remains to stay off beach and shore areas.”

Strong and unusual currents and unpredictable surges could still be present.

“Strong currents and surges can injure and drown people. There is a danger to swimmers, surfers, people fishing, small boats and anyone in or near the water close to shore.”

Surge activity had been seen in “multiple locations” along the Northland coast, the authority said in an emergency alert sent to Northland residents.

Civil Defence Minister Kiritapu Allan said it had been an “extraordinary morning” for New Zealand.

“This has been a dynamic event that is constantly evolving,” Allan told a media conference.

GNS scientist Bill Fry said there was no way Friday’s earthquakes could have been predicted. 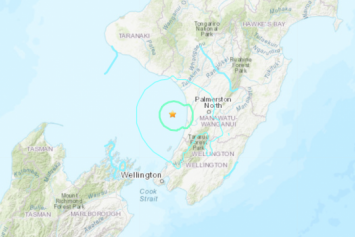 Fry said the earliest earthquake was felt by a vast majority of New Zealanders.

A tsunami marine warning was issued for Norfolk Island, with authorities warning there was a possibility of dangerous rips, waves and currents.

There were no immediate reports of injuries or significant damage from any of the quakes.

New Zealand’s Department of Conservation has a research base at Raoul Island, which is part of the Kermadec Islands.

However, there were currently no researchers, staff or contractors on the island during the quakes, the department said.