WELLINGTON - School teachers walked off the job in New Zealand's largest city, Auckland, on Monday (Nov 12), kicking off a week of national strike action as a three-month battle over wages and work conditions tests the Labour-led government.

The latest stand-off with its traditional union support base comes just over a year after Prime Minister Jacinda Ardern's Labour Party formed a coalition government, promising to pour money into social services and rein in economic inequality, which has increased despite years of strong growth.

Ms Ardern boasts a glowing international profile and historically high personal popularity, but has spent much of her term navigating labour disputes and plummeting business confidence.

About 30,000 teachers around New Zealand would strike throughout the week, forcing hundreds of thousands of children out of school.

"My plea would be for the teachers to consider the offer we put. We've put everything we've got on the table," Ms Ardern told reporters. "We hope they'll see in that a government that's really working hard to listen and hear them on the issues that they've raised."

The government revamped its pay offer by NZ$129 million (S$119.99 million) to a total of NZ$698 million late last week, according to Education Minister Chris Hipkins.

Read Also
Teachers in China are the world's most respected 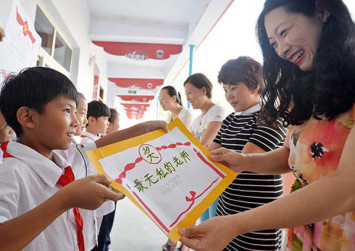 Members of the New Zealand Educational Institute (NZEI), the union representing primary school teachers, were considering the offer, but had already voted to hold a series of day-long national strikes, closing hundreds of schools.

Mr Hipkins said in an e-mailed statement: "It is disappointing that NZEI has decided to go ahead with strike action before asking its members to consider the strong new offer made this week during facilitation."

The government's determination to stick to strict "budget responsibility rules", including delivering fiscal surpluses and paying down debt, has disappointed public service sectors.

It sparked industrial action from nurses and court and tax department staff and prompted teachers in August to hold their first strike in 20 years.

Wage growth has remained sluggish in the island nation for years, despite soaring housing costs, which labour groups and economists say has left workers struggling.

Teachers have also singled out increased paperwork, staff shortages and growing class sizes as major issues, which the government has said it was working to address.

"The key things are the issues around workload and the huge amount of compliance, such as large class sizes. Teachers have tolerated this for too long," Newton Central school principal Riki Teteina told the New Zealand Herald newspaper during a protest by striking teachers in Auckland.