The two countries on the divided peninsula have had different time zones since 2015 when the North suddenly changed its standard time to 30 minutes behind the South.

Pyongyang cited a nationalistic rationale, saying it would return the North to the time zone used before Japan's 1910-45 colonial rule of the peninsula to mark the 70th anniversary of its liberation from Tokyo. 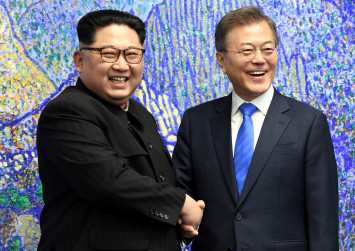 But Mr Kim promised to change the time zone back during the historic summit with South Korean President Moon Jae In, Mr Moon's spokesman said.

The pair held the summit - the third such meeting between the two Koreas - at the border truce village of Panmunjom, during which Mr Kim set the foot on the south side of the border for the first time and the two leaders pledged to pursue denuclearisation and a permanent peace.

"Since we were the ones who made the change from the standard time, we will go back to the original time. You can announce it publicly," Mr Yoon quoted Mr Kim as saying.

Mr Yoon hailed the move as a "symbolic move" for better ties between Seoul and Pyongyang.

The creation of "Pyongyang time" drew criticism from Mr Moon's conservative predecessor Park Geun Hye for further deepening the disparity between the two Koreas whose division was sealed by the 1950-53 Korean War.

The war on the Korean peninsula has technically not ended. Mr Moon and Mr Kim last Friday vowed to seek the formal end of the war.