Photos: Dazzling spectacles around the globe as billions usher in 2019

SYDNEY - Australia's largest city Sydney put on its biggest-ever fireworks display in a spectacular welcome to the New Year, kicking off a wave of celebrations for billions around the world.

A record amount of pyrotechnics as well as new fireworks effects and colours lit up the city's skyline for 12 minutes and dazzled the more than 1.5 million spectators who packed the harbour front and parks.

An earlier thunderstorm did not dampen the spirits of revellers who camped out at vantage points, some since the morning.

To mark the international year of indigenous languages in 2019, the harbour also hosted a ceremony celebrating Aboriginal heritage that included animations projected onto the bridge's pylons.

In the Indonesian capital Jakarta, more than 500 couples tied the knot in a free mass wedding organised by the government.

In Japan, locals flocked to temples to ring in 2019, as US boxing superstar Floyd Mayweather came out of retirement to beat Japanese kickboxer Tenshin Nasukawa in a multi-million-dollar "exhibition" bout outside Tokyo.

"It was all about entertainment. We had fun," Mayweather said in the ring after the event, which pitted him against an opponent less than half his age.

"I'm still retired... I did this just to entertain the fans in Japan," added the 41-year-old.

The party atmosphere swept across major cities in Asia, Europe, Africa and the Americas as the clock ticks past midnight.

A strong police presence has become a key element of the festivities, to protect crowds that could be targeted in terror and vehicle attacks.

Hong Kong: Glittering fireworks were sent skyward from five barges floating in Victoria Harbour in a 10-minute display watched by 300,000 people on the shore.

Moscow: Concerts and light shows were held across the city's parks and more than 1,000 ice rinks have been opened for merrymakers.

Paris: A fireworks display and sound and light show under the theme "fraternity" on the Champs-Elysees went ahead despite plans for further "yellow vest" anti-government protests at the famed avenue.

Berlin: Music lovers partied at a concert at the Brandenburg Gate, but a popular German tradition of setting off fireworks to mark the occasion has been banned in some other cities over safety concerns.

London: Britain's capital ushered in the New Year by celebrating its relationship with Europe amid turmoil over the Brexit referendum vote to leave the EU, with the fireworks display at the London Eye featuring music from the continent's artists.

Edinburgh: The Scottish capital's traditional Hogmanay celebrations takes on a pro-European theme ahead of the year in which Britain is due to exit the union.

HIGHLIGHTS FROM CELEBRATIONS AROUND THE WORLD

Thousands of merrymakers, many in plastic ponchos, waited in Times Square late on Monday in anticipation of the midnight descent of the New Year’s Eve ball, embracing a century-old New York tradition despite cold, soaking rain.

Christina Aguilera, New Kids on the Block and Sting were among the musical performers on hand to entertain the throngs filling the plaza, formed by the Manhattan intersection of Broadway and Seventh Avenue, to welcome in 2019.

The steady rain, forecast to last for the rest of the evening, appeared to do little to dampen the spirits of the assembled multitudes, many of whom donned colorful, oversized top hats handed out by organizers.

As the world parties, many will also look forward to 2019 and wonder whether the turmoil witnessed during the previous year will spill over into the next.

The political wrangling in Westminster over Brexit was one of the key stories of this year, with a resolution yet to be reached ahead of the scheduled March 29 departure.

US President Donald Trump dominated headlines in 2018 as he ramped up his trade war with China, quit the Iran nuclear deal, moved the American embassy to Jerusalem and met his North Korean counterpart Kim Jong Un in Singapore for a historic summit. 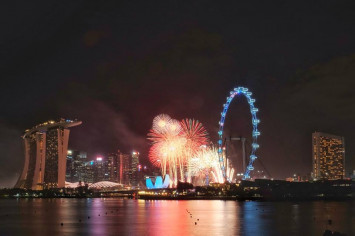 North Korea's commitment to denuclearisation will remain a major political and security issue into next year, as will Syrian President Bashar al-Assad's reassertion of control after Trump's shock military withdrawal announcement.

The war in Yemen, which started in 2014 and has already killed about 10,000 people and left some 20 million at risk of starvation, could take a crucial turn after a ceasefire went into effect in mid-December.

Numerous countries go to the polls in 2019, with key elections in India, Afghanistan, Indonesia, South Africa, Argentina and Australia.

Major sporting events on the calendar include the Rugby World Cup in Japan, the cricket one-day international World Cup in England and the athletics World Championships in Qatar.