Powerful 7.5 quake off New Caledonia triggers tsunami but no damage

A powerful 7.5-magnitude earthquake struck near New Caledonia Wednesday, triggering a tsunami alert and emergency evacuations across a swathe of the South Pacific, but there were no immediate reports of serious damage or injuries.

Authorities said the quake, followed by at least 10 strong aftershocks, was centred about 170 kilometres (100 miles) southeast of New Caledonia's Loyalty Islands at a depth of just 10 kilometres.

Tsunami waves were recorded moving out from the epicentre, prompting residents to flee to high ground and triggering surges as high as 72 centimetres (2.4 feet) -- on the island of Tanna, Vanuatu.

Island residents said the initial quake shook the walls of buildings and in places turned the sea foamy.

The Pacific Tsunami Warning Center initially warned waves of up to three metres (10 feet) could be expected and shallow quakes of that magnitude can be devastating.

But the centre later reported waves measured by its monitors around the region only reached about 72 centimetres (2.4 feet).

Civil defence officials in Noumea said tsunami waves hit parts of the Loyalty Islands and the Isle of Pines, but caused no damage.

"Reports from the area confirm that the strength of the tsunami has fallen significantly and there is no longer a major risk for the population," said a spokesman for the civil defence department.

"There have been no injuries or damage," he said.

Almost three hours after the quake, the Hawaii-based Pacific Tsunami Warning Center reported the threat stemming from the initial quake "has now passed". 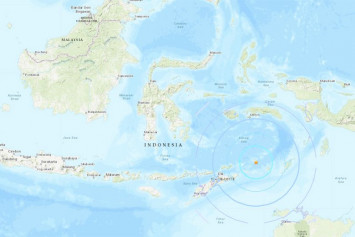 The quake triggered emergency warning systems in New Caledonia, where residents received an urgent text message directing them to go to refuges immediately.

Basile Citre, a municipal official on the Loyalty Island of Mare, said he had been in a meeting at the town hall when he felt a small tremor followed by a bigger shock.

"The building shook, but there was no damage," he told AFP. "When the sirens sounded, the population headed for higher ground for safety. For now, nothing serious has happened."

A spokesman for the Vanuatu geohazards observatory said the sparsely populated island of Tanna was expected to be most affected but no evacuations had been ordered.

"There are no sirens on Tanna but the people on the island are familiar with these situations and they will have taken precautions and gone to higher ground," he told AFP.

As multiple aftershocks of up to 6.6 magnitude were felt, CCTV footage showed bathers still frolicking in crystalline seas off Noumea, seemingly unaware of the seriousness of the threat on the other coast, just 50 kilometres away.

New Caledonia, with a population of 269,000 people, is a French Pacific territory.

Its citizens last month rejected independence in a referendum, though the vote revealed lower-then-expected support for remaining part of France.

The island is home to a quarter of the world's known supplies of nickel -- a vital electronics component -- and is a foothold for France in the Pacific, with French troops stationed on the island.