The 36-year-old royal, his wife, and their 22-month-old son Archie currently live in California after they made the decision to step back as senior members of the royal family and leave the UK last year.

And in part of his and Meghan's tell-all interview with Oprah Winfrey, the prince has now confirmed he felt pushed to leave the UK because of the racial abuse that was being targeted toward Meghan, who is bi-racial.

Harry insisted he doesn't believe the UK is "bigoted", but slammed "the tabloids" for perpetuating racism.

In a previously unaired clip of the interview which was shown on CBS This Morning, Oprah asked the couple: "Did you leave the country because of racism?"

And Harry responded: "It was a large part of it.

"I remember the Sentebale fundraiser. One of the people at that dinner said to me, 'Please, please don't do this with the media. They will destroy your life.' This person is friends with a lot of the editors and I said, 'What do you mean by that?'

Elsewhere in the interview - which originally aired on CBS on Sunday (March 7) - the couple also accused an unnamed member of the royal family of asking about Archie's skin tone before he was born.

Meghan, 39, claimed in the interview that there had been several "concerns and conversations" raised by a member of the royal family about how "dark" Archie's skin would be. 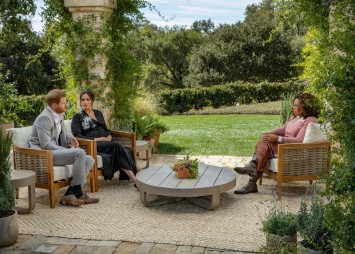 She explained: "That was relayed to me from Harry. Those were conversations that family had with him."

However, Meghan - previously known as Meghan Markle before she married into the British Royal Family - insisted she wouldn't reveal the identity of the individual.

She said: "That would be very damaging to them."

Prince Harry later admitted to being "shocked" by the conversations, but again insisted he didn't wish to name anybody.

He said: "That conversation, I am never going to share. At the time, it was awkward, I was a bit shocked."