A demonstrator wearing a face mask as a preventive measure against the coronavirus disease (Covid-19), holds a portrait depicting the face of George Floyd and a placard depicting Nazi leader Adolf Hitler with the United State's flag as a moustache that reads 'It's not just the police. It's the racist/imperialist state', during a protest against police violence, in Buenos Aires, Argentina June 2, 2020.

Images of a white police officer kneeling on the neck of African-American George Floyd, who then died, have sparked protests from Amsterdam to Nairobi, but they also expose deeper grievances among demonstrators over strained race relations in their own countries.

With violent clashes between protesters and authorities raging in the United States, anti-police-brutality activists gathered by the thousands in support of the Black Lives Matter movement in various European and African cities.

Peaceful protesters highlighted allegations of abuse of black prisoners by their jailers, social and economic inequality, and institutional racism lingering from the colonial pasts of the Netherlands, Britain and France.

"If you want to believe that we in the Netherlands do not have a problem with race, you should go ahead and go home," Jennifer Tosch, founder of Black Heritage Amsterdam Tours, told a crowd in Amsterdam, from where the Dutch West India Company operated ships estimated to have traded 500,000 slaves in the 1600s and 1700s.

Tosch and others drew a comparison between Floyd's death and the treatment of slaves centuries ago. "We have seen this image before as white persecutors and enslavers held down the enslaved and branded them with an iron."

In London, a protester held a placard reading "The UK isn't innocent," while in Berlin around 2,000 people protested outside the US embassy and two Bundesliga football players wore "Justice for George Floyd" shirts on Monday.

A similar message came from Dominique Sopo, president of French NGO SOS Racisme, which organised a small protest outside the US embassy in Paris on Monday.

"This issue of police racism is also, albeit with a lower level of violence, an issue that concerns France," he said.

Police in northern Paris fired tear gas on Tuesday to disperse demonstrators protesting over the 2016 death of a young black Frenchman in police custody - an incident that has drawn parallels with Floyd's killing.

Adama Traore's family have blamed excessive force used during his arrest, when the 24-year-old was pinned down by three gendarmes. Successive pathology reports have reached conflicting conclusions over whether his death two hours later resulted from asphyxiation or other factors including pre-existing conditions.

Amid a coronavirus lockdown, French activists also say there have been a number of police brutality cases in low-income neighborhoods where many originate from Africa.

In Istanbul, more than 50 people clashed with police officers minutes after beginning a protest over Floyd and what they called police brutality in Turkey.

At least five people were detained after scuffles with officers holding shields, after which other protesters gave speeches denouncing lethal police force and bans on demonstrations in Turkey during the pandemic.

Organizer Nafula Wafula said violence against blacks is international and cited the killing of prisoners in Kenya.

"The system that allows police brutality to happen in Kenya is based on class. In America, it's race and class."

Protests are planned in coming days in Gambia, Britain, Spain and Portugal. 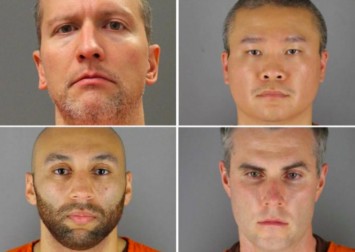 In Spain, protesters will mark the death of Floyd and "all sisters and brothers who have died at the hands of institutional racism on our streets," the African and Afro-descendant Community CNAAE said.

Portugal's gathering will address "the myth that Portugal is not a racist country".

But not all in Europe side with the protesters.

"Our support for Trump and the Americans who are seeing their Nation attacked by street terrorists backed by progressive millionaires," Vox wrote in a Tweet.

In the Netherlands, the Freedom Party's Geert Wilders tweeted: "White House under attack. This is no protest but anarchy by #AntifaTerrorists."

Even amid such racial division, Linda Nooitmeer, who heads the National Institute for the Study of Dutch Slavery and its Legacy, drew hope from Monday's protest in Amsterdam.

"We don't have the history of the civil rights movement in Holland, so what occurred yesterday was really something new. It is the start of real dialogue."