Police officers stand guard as flowers are laid at a gate of Buckingham Palace after Queen Elizabeth, Britain's longest-reigning monarch and the nation's figurehead for seven decades, died aged 96, in London, Britain Sept 8,

LONDON - Thousands of people gathered outside Buckingham Palace in London, shedding tears and singing "God Save the Queen" in an impromptu show of emotion as news emerged that Queen Elizabeth had died.

A double rainbow arched over the London skyline shortly before well-wishers fell into stunned silence as the palace lowered its Union Jack flag to half-staff, signifying the death of the monarch.

"We've grown up with her always being there," said consultant Margaret Parris, tears welling up in her eyes.

She had travelled 20 miles (32 km) to the palace after hearing earlier in the day that the queen had fallen ill.

Elizabeth died peacefully at her home in Scotland, aged 96. Her eldest son Charles, 73, is now king.

The mood on the esplanade in front of Buckingham Palace was very different three months ago, when the queen appeared on the balcony to huge cheers from revellers enjoying her Platinum Jubilee celebrations, which marked her 70 years on the throne.

On Thursday, a sense of anxiety turned to shock when news of her death was announced. The palace posted an official notice on the gates outside, which Londoners and tourists alike pressed forward to see. 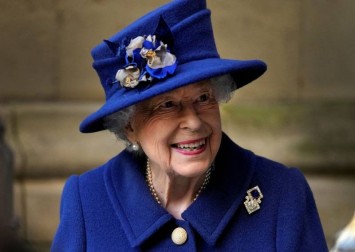 "It felt like history in the making, so we rushed over to the palace. Quite something for a holiday," said Nabeel Dockrat, 26, a tourist from South Africa.

The sense of history passing was felt just as keenly 300 miles away in Edinburgh, Scotland's capital.

"I think people appreciated, whether you are a royalist or not, that she really gave an amazing service and a lot to the country."

At Buckingham Palace, 22-year-old student Adam Wilkinson-Hill arrived with a bunch of white lilies on behalf of himself and a group of his friends who could not be in the capital.

"It's a massive shock to the nation," he said.

Thousands gathered outside Buckingham Palace in London to mourn the death of Queen Elizabeth who died on Sept 8. Read more: https://bit.ly/3eGAaBm

Posted by AsiaOne on Thursday, September 8, 2022