Russian investigators on Thursday rushed to establish the motives of a teenage gunman who opened fire in a Crimean technical college leaving at least 19 people dead and dozens injured, with the press dubbing the rampage "Russia's Columbine."

In the absence of an official version, speculation mounted on social media about what pushed 18-year-old student Vladislav Roslyakov to open fire on his fellow students.

Media published details about the killer, who officials say committed suicide at the end of his rampage.

According to the Russian daily Kommersant, the teenager "grew up in a rather poor family" with a disabled father.

The paper said Roslyakov's mother is a Jehovah's Witness -- a Christian organisation considered "extremist" and banned in Russia.

Russian television reported that his mother works as an orderly at one of the hospitals that treated victims.

Several media outlets made a comparison with the 1999 Columbine High School shooting in the US, which left 13 people dead. 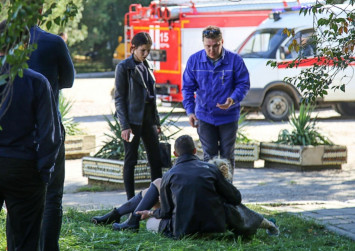 They alleged photos of the Kerch killer circulating on the internet showed him wearing a similar T-shirt to Eric Harris, one of the Columbine killers.

The gunman "moved from room to room and, like an experienced special forces fighter, first threw a home-made grenade before going to shoot people," Kommersant wrote.

It called the shooting an "unprecedented crime in Russia", which has strict gun controls.

City authorities said 19 people were killed -- 14 of them students and six under the age of 18 -- in the latest death toll on Thursday. More than 40 people were injured.

Crimean leader Sergei Aksyonov said late on Wednesday that 12 people were in an extremely serious condition.

AFP journalists in Kerch, a city on the Crimean peninsula annexed by Russia in 2014, saw the college cordoned off by Russia's National Guard, the army and the police.

Locals brought flowers, candles and toys to the scene on Thursday morning.

"We all lost people close to us, the children of Kerch. We need to know the truth now," Sergei Ivanov, who lives in Kerch, told AFP.

Aksyonov told journalists and relatives late on Wednesday that he had seen the body of the killer, whom he described as "not a Crimean, not even a person", adding that Roslyakov had acted alone.

"What pushed this non-person to do this, I don't know."

He added that the fourth-year student had aroused no suspicion, saying teachers called him "peaceful."

But he also confirmed earlier reports that the teenager had acquired a gun license legally and promised a transparent investigation with "no secrets".

Witnesses AFP spoke to on Wednesday reported they heard shooting and a "loud explosion" as well as people wounded by "shrapnel and bullets."

Roslyakov's body was discovered in the college library, according to authorities.

"The attack questions the state's ability to provide security in Crimea, a new region" for Russia, the daily Vedomosti said Thursday.

"No one can guarantee that this will not happen again," the pro-Kremlin paper Izvestia said.

It noted that "there is still no good-quality psychology service in Russian schools, or a system of support centres for families."

Russian President Vladimir Putin, who was in the Black Sea resort of Sochi, described the killings as a "tragic event".

Attacks by disaffected teenagers at schools and colleges have hit the headlines recently in Russia.

In January, a school student attacked a teacher and fellow students with an axe in Siberia and tried to set fire to the school building.

In April, another student stabbed a teacher and a fellow student in the Urals Mountains and then set fire to a classroom.