UNITED KINGDOM - British Prime Minister Theresa May said on Monday (Dec 17) that she intended to reschedule a delayed vote in Parliament on her Brexit plan in the week starting on Jan 14.

It comes as new data from Visa shows British consumer spending fell by the most since July last month, adding to signs of slowing economic growth towards the end of the year.

With under four months to go until the UK is due to leave the EU, people are tightening their purse strings.

Consumer spending fell by 0.7 per cent year on year since November. That's the steepest drop in four months - according to Visa.

More than 1,200 restaurants closed in the year through September as consumers lose their appetite to spend.

Restaurants are also feeling the pressure due to rising wages and higher food and drinks prices because of a weaker pound.

Senior market analyst Jasper Lawler of London Capital Group said: "I think what we're starting to see in the retail environment are signs that consumers are a little bit overextended and that would probably be even more so after Christmas. And so then the risk is that businesses stop hiring. Consumer spending slows down and that's when you really start hitting that kind of recession risk type territory but we're not there yet." 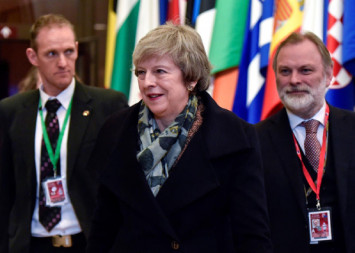 On her return to Parliament, May agreed to bring forward a parliamentary vote on her Brexit deal, which keeps close economic ties with the EU.

She said: "We intend to return to the meaningful vote debate in the week commencing the 7th of January and hold the vote the following week."

But if ministers do not back May's deal - and a second referendum doesn't go ahead, another possibility is crashing out completely and that's a scenario businesses fear would be catastrophic for the world's fifth-largest economy.

And that could lead to a rating cut in the new year, says credit ratings agency Fitch.