Policemen patrol in the rue des Grandes Arcades in Strasbourg, eastern France, after a shooting breakout, on December 11, 2018.

STRASBOURG - Shots rang out on Tuesday (Dec 11) night, and within minutes, the busy Christmas market in the centre of Strasbourg was deserted and the city centre plunged into silence.

The market, with 300 wooden chalets serving wine and local produce, is a major tourist draw, attracting hundreds of thousands of visitors to the historic city in north-east France.

"We were at Kleber Square, it was around 8pm (3am on Wednesday, Singapore time). I heard shooting and then there was pandemonium," one witness, who gave his name as Fatih, told AFP. "People were running everywhere."

As he escaped, he saw three wounded people on the ground just a few metres from the giant illuminated Christmas tree erected in the centre of town for the market. 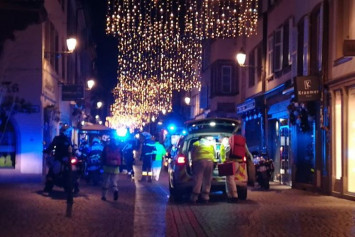 The gunman crossed the Pont du Corbeau, one of the bridges that lead to the historic centre of Strasbourg, and opened fire in the Rue des Orfevres.

Three people were killed and another 12 wounded by the shooter, Interior Minister Christophe Castaner said.

The 29-year-old suspect, who was known to the security services, was wounded in an exchange of fire with soldiers on patrol as part of regular anti-terror operations.

Within minutes, the crowd was evacuated by police, the city centre cordoned off and cleared. A few bystanders, apparently unaware of the situation, continued to wander, surprised at the sudden halt to festivities.

"We just started to see the police with shields, they spread out, they shouted 'Get out, get out', they were searching (for the gunman)," said Fatih, who was out with friends.

"We were confined in a restaurant, the owner had instructions. He took us all to the back of the room, all the lights were turned off," said Michele, a civil servant who was dining on a street near the incident.

"Shooting in Strasbourg's city centre. Thanks to all for staying at home until the situation has been clarified," deputy mayor Alain Fontanel said in a tweet shortly afterwards.

"We let everyone inside, down into the wine cellar. They're locked in there," local restaurant owner Mouad, 33, told AFP an hour after the attack.

When he came out of his establishment, he saw "a man on the ground, blood and bullet casings".

Some customers told him they had "seen someone with a weapon" running.

In front of the cafe Les Savons d'Helene, a man lying on the ground, covered by a survival blanket, was rescued by agents and surrounded by relatives, an AFP journalist said.

Bleeding profusely from the face, he was quickly evacuated in an fire brigade ambulance.

An parade of police cars and ambulances, sirens blaring, broke the silence in the city centre.

Around 11.30pm, a helicopter flew over the Neudorf, a neighbouring district where the attacker fled. Residents were still confined in the city centre.