Director General of the World Health Organisation (WHO) Tedros Adhanom Ghebreyesus attends a news conference on the situation of the coronavirus (Covid-19), in Geneva, Switzerland, February 28, 2020.

GENEVA - The World Health Organisation (WHO) said on Monday that its greatest coronavirus concerns were South Korea, Italy, Iran and Japan, but that it was still possible for all countries to contain the virus.

In the previous 24 hours, almost nine times as many coronavirus cases were reported outside China as inside, but WHO director-general Tedros Adhanom Ghebreyesus said the spread could be halted - unlike seasonal influenza.

"We are in uncharted territory - we have never seen before a respiratory pathogen that is capable of community transmission but at same time which can also be contained with the right measures," Tedros told a news conference in Geneva.

"If this was an influenza epidemic, we would have expected to see widespread community transmission across the globe by now and efforts to slow it down or contain it would not be feasible.

"But containment of Covid is feasible and must remain the top priority for all countries."

The number of Covid-19 cases in China continues to decline and on Sunday it reported 206 new infections, the lowest since Jan 22, he said. China has reported some 80,000 since the outbreak began.

Of the 8,739 cases reported by 61 countries outside China, 81 per cent are in just four countries, he said.

Among the other 57 affected countries, 38 have reported 10 cases or fewer, 19 have reported only one case, and "a good number have already contained the virus", Tedros added.

Dr. Mike Ryan, head of WHO's emergencies program, said: "There is a very small number of countries in which we have demonstrated and established community transmission."

Containment and significantly slowing down the spread of virus allows health systems and laboratories to prepare and for drugs and vaccines to be developed, he said. 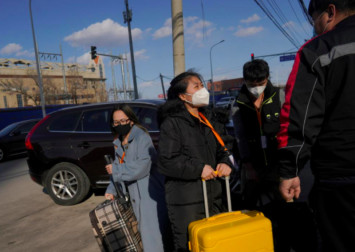 Ryan said that extreme measures taken by authorities in Wuhan to halt the virus were probably not needed elsewhere, and noted countries had different levels of "social acceptance".

"Certainly it is clear in the likes of Singapore for example, if you take another example outside, in Hong Kong, that measures that have not involved walling off cities or completely banning travel, have been very effective in both suppressing and driving transmission down over the last six weeks."

A WHO team arrived in Iran on Monday to support authorities and deliver 100,000 diagnostic tests and protective gear for 15,000 health workers, the agency said.

Tedros, referring to moves to allow supplies to enter Iran despite sanctions over its nuclear programme, said: "I would like to commend actually the statement from the United States in support of Iran.

"I think we have a common enemy now. And using health, and especially fighting this virus, as a bridge for peace is very, very important."