Ex-Goldman Sachs banker Roger Ng arrives for his criminal trial, at the United States Courthouse in Brooklyn, US on Feb 16, 2022.

NEW YORK - Two Goldman Sachs bankers concocted a scheme involving their wives to conceal kickbacks they received for helping to loot Malaysia's 1MDB sovereign wealth fund, one of the bankers testified on Thursday (Feb 24) at the corruption trial of the other, Roger Ng.

Tim Leissner, who had been Ng's supervisor at Goldman before becoming the star government witness against him, said he received kickback payments from a Malaysian intermediary, Jho Low, for helping embezzle funds Goldman raised for 1MDB through three bond sales.

The charges stem from one of the biggest financial scandals in history, in which US prosecutors say US$4.5 billion (S$6.1 billion) of the $6.5 billion Goldman raised for 1MDB was diverted to government officials bankers and their associates through bribes and kickbacks.

Leissner, 52, said that after the first bond sale in 2012, he received $35 million from Low, and transferred half of it to Ng.

Both then discussed crafting a "cover story" to explain the payments so the banks processing the funds would not grow suspicious, Leissner said. 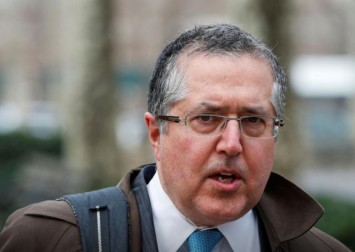 "His wife's family had previously made an investment in my wife Judy's business in China, and this was return of that investment," Leissner told the jury in Brooklyn federal court, referring to his former wife Judy Chan.

Leissner said the story was untrue, and that he did not know if Ng, 49, relayed it to his bank.

The statement could be problematic for Ng.

His lawyer, Marc Agnifilo, has denied the payment was a kickback, and said the men's wives had a legitimate business together.

Agnifilo has said he plans to call Ng's wife, Hwee Bin Lim, to testify in her husband's defense.

He may question Leissner about the payment during cross-examination, which will not take place until next week because the US Department of Justice delayed disclosing about 15,500 documents related to Leissner to the defense.

Agnifilo signaled in his opening statement that he will challenge Leissner's credibility by asking about his infidelity.

Leissner testified on Thursday that in 2013, while separated from Chan, he forged divorce papers in order to marry Kimora Lee Simmons, the American model and former wife of US music producer Russell Simmons.

Goldman in 2020 paid a nearly $3 billion fine and arranged for its Malaysian unit to plead guilty in US court.

US prosecutors indicted Low in 2018, but he has not been arrested by American or Malaysian authorities. Malaysia has said Low is in China, which Beijing denies.