Istanbul - A Turkish passenger plane that plunged off a runway onto a cliff precariously close to the sea suddenly turned after a surge of power in one of its engines, pilots told investigators in comments published Monday.

The Pegasus Airlines Boeing 737-800 plane had landed normally at Trabzon airport late on Saturday on a flight from Ankara but then went off the runway just metres (feet) from the waters of the Black Sea with its wheels stuck in mud.

All 162 passenger and six crew were safely evacuated but the plane remains stricken on the side of the muddy embankment, with the aircraft now secured with a cable to prevent it from slipping into the sea.

The pilot, co-pilot and crew have now made statements to Trabzon prosecutors and both pilots passed breathalyzer tests, the Dogan news agency said. 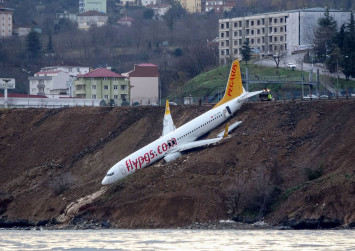 "When we were going to make our usual manoeuvre towards the right from the seaside by reducing our speed, the right engine suddenly gained speed for a reason we do not know," the pilot was quoted as telling the prosecutors.

"Due to this speed, the plane got out of our control and suddenly swung to the left and got stuck into the mud in the cliff." It is still not clear what caused the sudden surge in power from the right engine. Images published by Dogan showed that one of the engines had fallen into the water.

The pilot said that passengers were ordered to leave the plane by the back door without taking personal belongings, followed by the crew and finally the pilots themselves.

Turkey's civil aviation authority will meanwhile examine the plane's black box. Trabzon's airport was closed for a time but is now operating normally.

Dogan news agency said that work to remove the plane from its current position would begin later in the day.