Police in Kazakhstan's largest city Almaty have detained a suspect after the murder of Olympic figure skating hero Denis Ten, who won bronze at the 2014 Sochi Olympics, the city prosecutor said.

Ten, 25, one of Kazakhstan's most noted sporting heroes, "caught two unidentified persons who stole the mirrors from his car" on Thursday at around 1500 local time (0900 GMT).

"As a result of the scuffle, Denis was stabbed," a statement from the Almaty prosecutor's office said Friday.

Ten died in hospital after medics fought to save his life following the attack, the prosecutor's statement added.

The detained suspect has been identified as Nurali Kiyasov, born in 1994. Police are continuing to search for another suspect, who was not named.

The murder has led to mourning across Kazakhstan, while also prompting calls on social media for the resignation of interior minister Kalmukhanbet Kassymov. 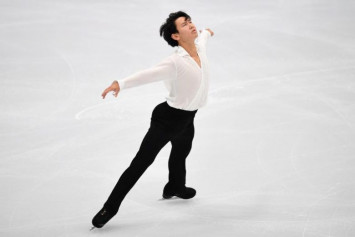 The Olympic Council of Asia on Friday expressed "shock and immense grief".

"It is difficult to comprehend and to accept this truly awful news about the death of Denis Ten," said OCA President Sheikh Ahmad Al Fahad Al Sabah in a statement.

"He was one of Asia's most talented and popular athletes and to lose him at such a young age is tragic. It is a huge shock and we feel immense grief over his death."

The International Skating Union said in a tweet it was "deeply saddened" by the news.

Ten was of Korean origin and his great-great-grandfather was a Korean-born independence fighter, General Min Keung Ho.

He was trained by American coach Frank Carroll following a spell with Russia's most renowned coach, Tatiana Tarasova.

At Sochi in 2014, he won bronze in the men's free skating final, despite skating in two different boots.