An alleged ISIS militant sits blindfolded in the back of a pickup truck after he was taken into custody by SDF forces, Jan 30, 2019.

OMAR OIL FIELD, Syria - Red-and-white scarves tied around their eyes, men suspected of belonging to the Islamic State in Iraq and Syria (ISIS) group sit in the back of a pickup truck in the desert of eastern Syria.

US-backed forces have singled them out from hundreds of men fleeing what remains of the extremist group's dwindling bastion on the border with Iraq.

Backed by US-led coalition air strikes, the Syrian Democratic Forces, a grouping of Kurdish and Arab fighters, have advanced against the militants, squeezing them into a tiny patch east of the Euphrates River.

The fighting and air strikes have led more than 36,000 people to flee since the start of December, including more than 3,100 suspected militant fighters.

On Wednesday (Jan 30), more than 300 men arrived near Omar oil field, where the Kurdish-led SDF separated them into two groups: civilians and suspected militants.

The alleged fighters are blindfolded, ushered into the truck and ferried off for questioning by the SDF.

Inside the tent, a few hundred men vetted as civilians sit, some wearing their traditional red-and-white scarfs on their heads.

Most of them sporting the long beard that was compulsory under ISIS rule, they wait to be trucked to a camp for the displaced in Kurdish-held territory further north.

"All Syrians raise your hands," says an SDF fighter, and just a handful do so.

All the rest, he says, are Iraqis - mostly from the neighbouring Iraqi province of Anbar.

The men AFP interviewed spoke of a lack of food and medicine inside what remains of the ISIS pocket, and of bodies lying under rubble in the streets after air strikes.

"There are lots of air strikes," 17-year-old Ashraf Wissam says, adding he lost all his family in the raids. 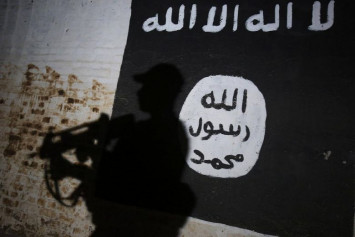 "The ISIS fighters are Iraqis, Syrians," says the teenager from the Iraqi city of Fallujah in Anbar.

"We see them in the street, and we run away from them. Any group of people is a target."

Adnan, a 39-year-old Iraqi, says there are still foreigners inside the pocket.

"There are a lot of foreign fighters: Uzbeks, Turks, Russians. There are French, but not many," he says.