'Systemic challenge' or worse? Nato members wrangle over how to treat China

Workers paste the posters announcing the Nato Summit outside the Madrid Fair before a Nato summit in Madrid, Spain on June 27, 2022.

SCHLOSS ELMAU, Germany - Nato's first new strategy concept in a decade will cite China as a concern for the first time but member states remain at odds over how to describe the country with the world's largest military and its relationship with Russia, Nato diplomats say.

Both a summit of the G7 rich industrial democracies now underway in Germany and a Nato summit to follow will tackle China's deepening ties with Russia after Moscow's invasion of Ukraine, and what is seen as the growing inclination of China to flex its geopolitical muscle and coercive economic might abroad.

The new strategic concept to be endorsed at the Nato summit in Madrid on Wednesday (June 29) and Thursday will address increasing threats posed by Russia and, for the first time, China, the world's second-largest economy, US officials said last week.

A White House official voiced confidence on Sunday that the document would include "strong" language on China, but said the negotiations were continuing ahead of the Nato summit in Madrid on June 29-30.

Nato diplomats said the United States and Britain have pushed for more forceful language to reflect what they see as China's increasing military ambitions and growing concern that it could attack the democratically governed island of Taiwan, which Beijing regards as its own territory.

France and Germany - given major European industrial investment in China - meanwhile favour more measured references, said the Nato diplomats, who spoke on condition of anonymity since the document was still being finalised.

At the Group of Seven summit on Monday, US National Security adviser Jake Sullivan told reporters that Nato's strategy paper would "speak in ways that are unprecedented about the challenge that China poses".

One diplomat said a compromise was taking shape under which China would be described as a "systemic challenge", while including balancing language referring to a "willingness to work on areas of common interest" with Beijing.

The strategy document, which will update US-led Nato's objectives and values, will also state member states' "awareness of the need for "resilience", the diplomat said.

Negotiators are in addition fine-tuning how to describe the relationship between China and Russia, with the Czech Republic and Hungary strongly opposed to the phrase "strategic convergence" to define it, one of the diplomats said.

China's foreign ministry has said the sole purpose of Western assertions about Chinese threats is to contain and suppress China's development and maintain US hegemony.

Nato officials are racing to complete the new strategic concept in time for the Madrid summit, where the Russian invasion of Ukraine will take centre stage. 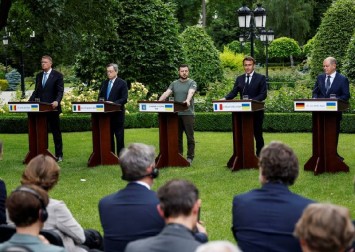 The Pentagon's latest annual report to the US Congress underscored the importance of "meeting the pacing challenge presented by the People's Republic of China’s increasingly capable military and its global ambitions".

US officials stressed the importance of including China in Nato's updated strategic concept, and Australia, New Zealand, Japan and South Korea were therefore invited to the Nato summit for the first time.

The point was to signal that Nato is not “taking our eye off the ball in China” even as it focuses on strengthening Ukraine's defences, one of the officials said. “It's firmed up the democratic world in both Russia and China.”

“Nato can’t afford to ignore China,” agreed a European official. “Europe was a bit behind in recognising this, but views have definitely shifted in light of Hong Kong,” referring to Beijing's security crackdown on the Asian financial hub.

Another European official said: “We tried to build an era of being nice and incentivising China and we got President Xi (Jinping)." Western critics say Xi has taken Beijing on a more authoritarian path at home and an aggressive course abroad. "So I think most people would think a different approach is needed."

Regarding Nato's original mission to counter Russian threats to the West, the official added: “Nato's area of operation is simply north of the Tropic of Cancer. It has no eastern or western limits. So I think it’s fair that Nato looks at that.”