Tsai’s re-election comes days before the United States and China are expected to sign phase one of a deal to end a damaging trade war that has been a principal focus for US President Donald Trump.

WASHINGTON - US Secretary of State Mike Pompeo congratulated Taiwanese President Tsai Ing-wen on her re-election on Saturday (Jan 11) and lauded her for seeking stability with China “in the face of unrelenting pressure.”

In a statement that could anger Beijing, which views Taiwan as part of China, Pompeo said Taiwan’s democratic system, free market economy and civil society, made it “a model for the Indo-Pacific region and a force for good in the world.”

“The United States thanks President Tsai for her leadership in developing a strong partnership with the United States and applauds her commitment to maintaining cross-Strait stability in the face of unrelenting pressure,” Pompeo said.

While Pompeo did not mention Beijing by name, his comment referred to pressure Tsai has faced from China throughout her first term.

Tsai’s re-election comes days before the United States and China are expected to sign phase one of a deal to end a damaging trade war that has been a principal focus for US President Donald Trump.

Although Washington has no formal diplomatic ties with Taiwan, it is bound by law to provide the island with the means to defend itself and the Trump administration.

The US Deputy Assistant Secretary of State Jonathan Fritz told an election-watching event in Washington that Taiwan had “provided a stellar example of democracy in action.”

In reference to China, he added that Washington would “continue to work to counter unilateral efforts that seek to alter the status quo.” 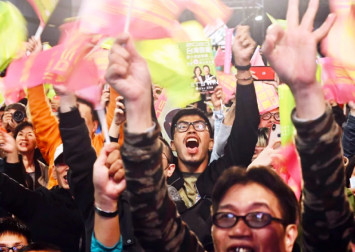 Randall Schriver, until the end of last year the Pentagon’s top official for East Asia, told the same event the election should be in inspiration to other countries to resist pressure from Beijing as well as to people in China itself.

“Taiwan was under extraordinary pressure and facing coercion,” he said. “Taiwan is not the only country in the Indo-Pacific that faces that. Other countries, as they prepare for their elections, will take great inspiration and heart for how Taiwan has stood that kind of pressure and carried forward with a very successful election.”

Taiwan enjoys strong bipartisan support in Washington and the US administration has expressed concern at Chinese efforts at intimidation and influence there, while watching with alarm as China has persuaded countries in Central America and the Pacific to switch diplomatic allegiance from Taipei to Beijing.

At the same time, Trump himself, in focusing on reaching a trade deal with Beijing, has shown some caution in his approach to Taiwan, despite the eagerness of some hawks in his administration for stronger shows of support.

Daniel Russel, the top US diplomat for East Asia until early in the Trump administration, said the extent of Trump’s interest in Taiwan had seemed to be as a customer for US weapons systems and as leverage on Beijing in the trade war.

“At times that has meant moving in Taipei’s direction; at other times it has meant backing off demonstrations of support,” he said.

“Now that a mini-trade deal has at last been reached with Beijing, Trump may have fewer qualms about letting his national security hawks demonstrate more visible backing for Taiwan,” he said.