Tearful Messi confirms he is leaving Barcelona, in talks with PSG

BARCELONA  - Lionel Messi wept on Sunday as he bade farewell to his boyhood team FC Barcelona and confirmed he was talking with French club Paris St Germain over a possible move.

The 34-year-old Argentine's emotional news conference followed Barca's announcement last week that it could no longer afford him after a glittering two decades.

French newspaper L'Equipe reported on Sunday that he will travel to Paris either Sunday or Monday to undertake a medical and finalise a deal with the Qatar Sports Investment-owned club.

While Messi did not confirm he would definitely join the Parisians, he said his plans were to carry on playing as long as possible, adding he still harbours ambitions to win another Champions League trophy.

"As long as I go on being competitive and as long as my body responds (I'll carry on playing)," he told a news conference.

"As long as I can, I will carry on competing."

PSG declined to comment on the report that Messi would be arriving in Paris later on Sunday. "We are not in a position to confirm anything," a club spokesman said.

Read Also
Football: What next for Messi after Barca departure? 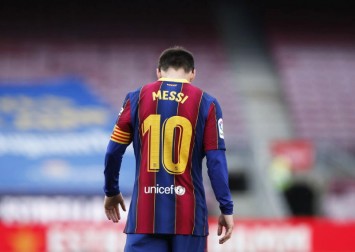 "I tried to behave with humility and respect and I hope that is what remains of me when I leave the club," said an emotional Messi as hundreds of fans, many wearing his No. 10 jersey, massed outside Barca's Camp Nou stadium to bid farewell to the player they called Messiah.

Messi broke down as he walked onto the stage before conducting his news conference and was handed a tissue by his wife Antonella Roccuzzo as he fought back the tears.

"This is the toughest moment of my career. When the club told me, I just froze. This is all like a bucket of cold water has been poured over me and we are still coming to terms with it," he sobbed.

This is the word of Leo #Messi: pic.twitter.com/k0btQ7k1py

It had been widely reported by local media that Messi was set to stay at Camp Nou, with the player admitting he had agreed to a five-year deal involving a 50per cent pay-cut.

"Honestly, when the elections happened (in March), I spoke with (Barca president Joan) Laporta, we had dinner and after that I was convinced I would be staying," Messi said.

La Liga announced last Wednesday that it had secured a private equity injection of 2.7 billion euros from firm CVC, with the funds to be shared amongst the clubs in return for a 10per cent of the league's revenue.

It had been believed this would allow Barcelona to get the Messi deal over the line, however after Real Madrid rejected the proposal and said they would take legal action against La Liga, Barca also came out against it.

Laporta told a news conference on Friday that Barca's finances were in worse shape than he had thought after conducting an audit.

He added the league informed him that accepting this injection was the only way they would approve a new contract for Messi, but rejected that saying he had to put the long-term interests of the club above any player.

Marca also reported on Sunday that Barca fans had hired a French lawyer, who had lodged a case with the Paris Appeals Court to try and block Messi's move to PSG.

Messi, Barca's all-time record goalscorer with 682 in 21 years, received a lengthy standing ovation from the media, current and former teammates and coaches in attendance.

It was noticeable that he was not accompanied by Laporta or any of the other Barcelona directors.

All 35 trophies he won during his time at the club were laid out for what the club described would be a private photo session after the news conference.

Barcelona faces Juventus in a pre-season friendly on Sunday, with nobody given Messi's No.10 shirt for the game.

The club have not confirmed if they plan on leaving it vacant for the new season.