'They roam about like cats': Spanish cities try to halt wild boar invasions

A female boar walks through Las Planas neighbourhood in the Collserola Natural Park in Barcelona, Spain, on Aug 10, 2022.

BARCELONA, Spain – Large groups of wild boar are now a common sight in some Spanish cities and authorities say they have no option but to capture and put them down as they pose a danger to humans but have become too used to scavenging to live back in the wild.

Attracted by garbage bins and people feeding them, the wild boars wander or lie about in parks and suburban streets, often causing scooter and bicycle accidents or pestering people carrying shopping bags.

This month a girl was taken to hospital with injuries after an encounter with a wild boar in the seaside town of Cadaques northeast of Barcelona.

Barcelona alone reported 1,200 incidents involving wild boars last year. Colombian popstar Shakira said the animals had attacked her and her son as they walked in a Barcelona park.

"No veterinarian likes to kill animals," Carles Conejero, a veterinary technician in charge of a programme to control the boar problem in Barcelona, told Reuters.

"But we have to do it... We cannot release them back into the wild because they have lost their instincts."

Later that night Conejero's team used drop nets to capture a breeding group of wild boars, which squealed loudly before being sedated and then euthanised.

"This is the worst part of the job," said Conejero as he piled up the dead animals in a van.

Although the problem is not new in Spain, it got worse during the Covid-19 pandemic when more wild animals ventured into urban areas that had turned much quieter due to lockdowns. 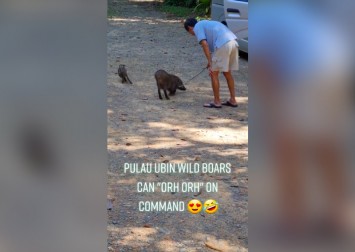 Apart from the scheduled captures, Barcelona's plan to tackle the boar encroachment includes protection of trash bins, fines for residents who feed the animals and social awareness campaigns.

Dead boars are studied for diseases and food habits.

Local residents agreed that the habit of feeding the boars must stop.

"The problem is that they stop being wild animals, they just roam about like cats," said Alex, 40.