And now the player who transformed golf with his first Masters title in 1997 is a major champion again after 11 years marked by personal turmoil and injuries that threatened not only his career but his prospects of living an ordinary life.

Woods expanded the sport's reach as no one before him. The sight of Woods, clad in power red and fist-pumping as the putts dropped, inspired a generation of golfers and launched millions of dollars worth of endorsement campaigns.

At 25, he became the first man to hold the US Open, British Open, PGA Championship and Masters titles at the same time, a feat dubbed the "Tiger Slam" when he completed it at Augusta National in 2001. 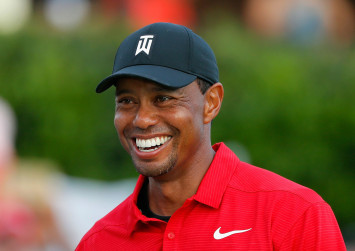 In 2002, he emulated Nick Faldo and Jack Nicklaus in winning back-to-back Masters. In 2008, grimacing in pain with nearly every step, he beat Rocco Mediate in a playoff to win the US Open and despite ever increasing injury troubles his 14th major title appeared to have him within comfortable reach of Nicklaus's record of 18.

But in November of 2009, a bizarre car accident outside his Florida home unearthed a series of infidelities that would destroy his marriage.

As sponsors began to flee, Woods took an "indefinite break from professional golf" to get his life together. He returned, penitent, in 2010, but it would take until 2013 before he returned to the summit of the world rankings.

One year on, he was battling back trouble that would relegate him to the sidelines for extended periods. "I had serious doubts after what transpired a couple of years ago," Woods said when asked if he ever wondered if he would win another major - or even resume his career.

"I could barely walk. I couldn't sit. Couldn't lay down. I really couldn't do much of anything."

He underwent a last resort spinal fusion operation in April of 2017. A month later, he found himself tabloid fodder again when he was arrested after falling asleep at the wheel under the influence of several drugs he took to combat pain.

Eventually, however, the procedure proved a success, Woods saying it "gave me a chance at having a normal life".

"I was very fortunate to be given another chance to do something that I love to do," Woods said. "But more importantly, I've been able to participate in my kids' lives in a way that I couldn't for a number of years... now I'm starting to be able to play with them and do things in their sports. That's something I always missed."

Golf missed him, too.

The excitement that greeted his return to the PGA Tour in 2018 only grew as his game improved, his presence in a tournament guaranteed to boost attendance and television coverage. The "Tiger Effect" persisted, despite past scandal and current uncertainties, with pundits and fellow pros noting that Woods "moved the needle" like no other player.

As his comeback season in 2018 progressed, Woods contended in two majors and finally won again, at the US PGA Tour Championship in September.

"I felt if I could somehow piece this together that I still had the hands to do it," Woods said. "The body's not the same as it was a long time ago, but I still have good hands."

After he sank his winning putt on Sunday - letting out a roar of release as he raised club and fist to the sky - fans began chanting "Tiger! Tiger! Tiger!".

Augusta National officials had scrapped the usual 18th-green presentation of the green jacket, wanting to clear the course before expected severe weather moved in. But even the weather bowed to Woods - the storms held off, the fans stayed put and finally saw the jacket slipped over his shoulders for a fifth time.

"Incredible," said Brooks Koepka, who finished tied for second behind Woods. "I mean, I think we all knew it was going to come... as a fan, just of golf and of Tiger, it's very special."