TORONTO - A Toronto police officer who refused to shoot the man suspected of plowing a van into crowds of pedestrians on Monday, killing 10 people, was praised for restraint in the face of a suspect who claimed to have a gun.

Video footage showed the police officer staring down the suspect at gunpoint in the middle of a street, while the man pointed what appeared to be a gun and shouted "Kill me." The video, obtained by CBC News, showed the suspect repeatedly pulling an object from his side and aiming at police.

The arrest was praised as a welcome example of police restraint in the midst of chaos, coming just minutes after a white rental van plowed into a lunchtime crowd in north Toronto, killing 10 people and injuring 15 in one of the most violent incidents in Canadian history. 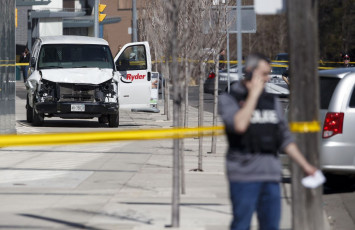 "It's quite apparent that the suspect was trying to be executed. He was really looking for 'suicide-by-cop,'" Gary Clement, a retired Royal Canadian Mounted Police superintendent with 34 years experience of policing, told Reuters.

The Toronto Police Service declined to name the officer involved in the stand-off, but Clement said he appeared to be a "very seasoned and mature officer."

"I would say this individual met the right police officer," Clement said. "Nobody knows how they're going to react. In this situation a lot of it comes down to muscle memory. This guy reacted in a very mature manner."

The lunch hour turned deadly in Toronto when a driver in a white van ploughed through pedestrians on a busy sidewalk. Ten people were killed and dozens more injured. http://str.sg/oGwY

"They are taught to use as little force as possible in any given situation," he said.

It helped that the officer had a clear view of the suspect, who was out of the van and pacing between the sidewalk and the arresting officer, Clement said.

The non-violent end to the standoff won plaudits on social media.

"Wow, at how these Canadian cops brought in this suspected killer," said Twitter user Stuart A. Thompson in a posting.

Police in the United States have been criticised for being too quick to pull the trigger after a series of high-profile police shootings and deaths of suspects during arrest.

Witnesses in Toronto expressed horror at the murders.

Young Lee, a 56-year-old attorney, looked out his third-floor office window on Yonge Street and was shocked to see medics attempting to resuscitate two of the victims.

"I've never seen violence like this here in Toronto," Lee said. "I felt a mix of rage and a lot of sympathy for the victims."