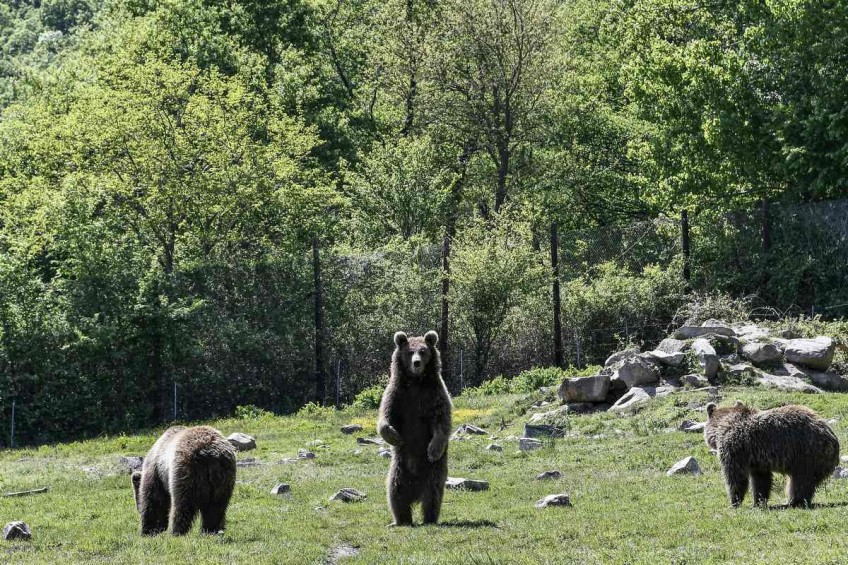 Orphaned as an infant, three-year-old Patrick takes a wary view of visitors. He crouches low, licks his claws and starts humming -- a bear's equivalent of thumb-sucking.

"It soothes him when he's stressed," says Melina Avgerinou, a caretaker at the Arcturos bear sanctuary in northern Greece.

Patrick's tale is typical of many bears that have found refuge in the Arcturos sanctuary at Nymfaio on the slopes of Mount Vitsi, some 600 kilometres (350 miles) northwest of Athens.

He was less than a month old when found wandering near the Greek-Albanian border, his mother apparently killed by poachers.

Too young to know the ways of the wild, he never learned to survive without human assistance. The sanctuary released him to nature when he turned one, but he sauntered back just over a month later.

"As he did not learn to fear humans, it's not safe for him in nature, so he will stay here for the rest of his life," Avgerinou says.

Like Patrick, others here have psychological and physical scars.

Barbara, an aged female, came from a Serbian zoo. Two decades on, she still paces nervously in her forest enclosure and shakes her head as if chained to a cage.

Three-year-old Usko was found in Macedonia as a baby. He was paralysed from the waist down, so Arcturos staff -- amazed by his zest for life -- fashioned a wheelbarrow that enables him to move around in an area with flat surfaces.

'Nature's not a rival'

"There are a lot of problems with captive bears, mainly in the Balkans. The biggest problem is in Albania and (Macedonia) where there are still legal shortcomings," Avgerinou says.

"So there are still bears that need shelter... there are other sanctuaries in the Balkans and (elsewhere) in Europe, but they are generally full," she adds.

A still-suckling baby called Luigi -- named after Italy goalkeeper Gianluigi Buffon -- arrived in April after a fruitless two-day search for his mother.

Two youngsters from Montenegro had preceded him and three more infant bears from Bulgaria will be added soon.

Founded in 1992, Arcturos shelters bears and wolves mainly from the Balkans but has also taken large predators from as far away as Austria and Georgia.

In all more than 20 bears and seven wolves live in separate enclosed habitats in the villages of Nymfaio and Agrapidia -- most of them rescued from Balkans poachers, animal collectors and restaurant owners who had them on display to amuse patrons.

The wolf colony is about to double as seven more are due to arrive from a zoo in Italy.

The bears live in five hectares (12.5 acres) of beech forest on the mountain, donated by the local municipality. The wolves share 17 acres of oak forest farther down the valley.

"We try to teach people that we are not alone in nature, and that we should not see nature as a rival," says Arcturos guide Vassilis Fourkiotis, who comes from a local farming family.

Arcturos was originally created to counter the use of bears as entertainment.

Bear dancing -- forcibly taught to the animals by making them walk on hot coals -- is a practice once popular at country fairs that still survives in the Balkans, though it was eradicated in Greece a few decades ago.

Over the years, the organisation's activities have expanded to environmental awareness campaigns, veterinary care and reintegration.

So far, two males and a female have been successfully returned to the wild.

A recent 500,000 euro ($620,000) donation from the Stavros Niarchos Foundation, the creators of the National Opera and Library in Athens, will enable the sanctuary to expand into the largest centre of its kind in the Balkans.

"It will be a well-rounded centre able to offer veterinary care as well as refuge, providing solutions to neighbouring countries lacking such facilities," says Arcturos spokesman Panos Stefanou.

Arcturos also runs a programme to save from extinction a local breed of Greek sheepdog that is perfectly attuned to local conditions.

"In contrast to other breeds, this sheepdog will not pursue and try to kill a predator," he adds.

In addition, the organisation works with other environmental groups to educate farmers on how to protect their livestock from predators without resorting to guns and poison.