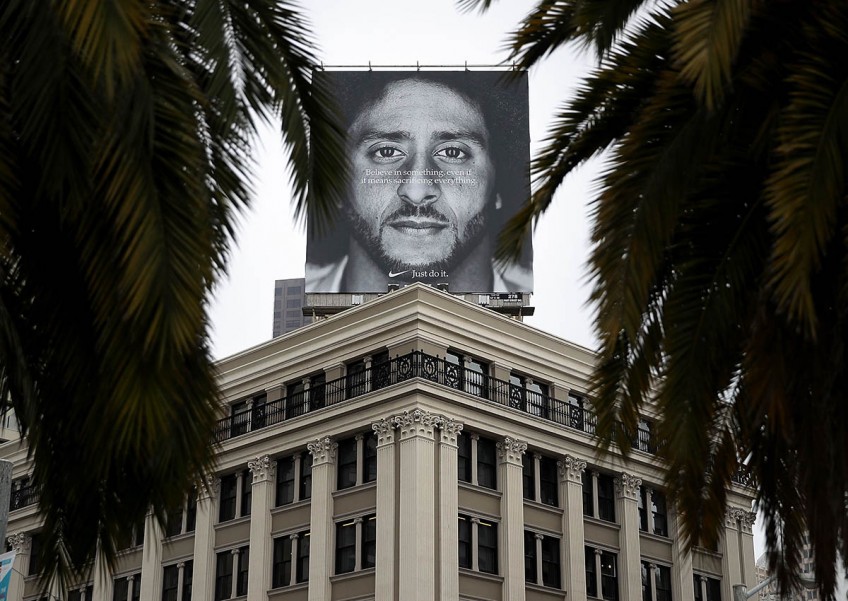 A billboard featuring Kaepernick is displayed on the roof of the Nike Store in San Francisco, California.
AFP

Trump, who on Tuesday described Nike's deal with Kaepernick as "terrible," said the sports equipment giant's endorsement of the ex-NFL star had backfired.

"Just like the NFL, whose ratings have gone WAY DOWN, Nike is getting absolutely killed with anger and boycotts," Trump wrote on Twitter.

"I wonder if they had any idea that it would be this way? As far as the NFL is concerned, I just find it hard to watch, and always will, until they stand for the FLAG!"

Nike revealed on Monday that Kaepernick would be at the centre of a new campaign to mark the 30th anniversary of the company's "Just Do It" slogan.

The move was criticised by some on Twitter, with several users vowing to boycott Nike while others posted videos of them destroying the company's merchandise.

Nike shares dipped on Tuesday but had climbed in trading on Wednesday.

Kaepernick has become a polarising figure after refusing to stand for the national anthem in 2016 in an effort to draw attention to racial injustice in America.

The 30-year-old's protests came after the deaths of several unarmed black men during confrontations with law enforcement.

In 2017 Trump decried NFL players who refused to stand for the US anthem as "sons of b*****s" who should be fired.

That in turn triggered a wave of fresh protests across the NFL, which remains America's most popular major sport.

Kaepernick, who led the 49ers to the brink of a Super Bowl victory in 2013, has been unable to find employment with an NFL team since being released by San Francisco in 2017.

He is currently suing the NFL, alleging team owners colluded to keep him out of the sport.

On Monday, Nike released a promotional image for their new Kaepernick-inspired campaign which featured a black and white portrait of the player superimposed with the slogan "Believe in something. Even if it means sacrificing everything."

On Wednesday, Nike released an advert featuring Kaepernick which will be aired during Thursday's season-opening game between the Philadelphia Eagles and the Atlanta Falcons.

"Don't ask if your dreams are crazy, ask if they're crazy enough," Kaepernick asks at the end of the spot.