WASHINGTON - US President Donald Trump said on Tuesday (July 3) talks with North Korea were making progress despite reports Kim Jong Un's regime had stepped up its nuclear programme after the two leaders held a historic summit.

"Many good conversations with North Korea-it is going well!" he tweeted. "In the meantime, no Rocket Launches or Nuclear Testing in 8 months.

"All of Asia is thrilled. Only the Opposition Party, which includes the Fake News, is complaining. If not for me, we would now be at War with North Korea!"

Trump's comments came as his Secretary of State Mike Pompeo was to head back to North Korea on Thursday to flesh out the bare bones nuclear agreement signed by the two leaders during their summit meeting in Singapore last month.

Wednesday (July 4) marks the first anniversary of North Korea's test-firing of its first intercontinental ballistic missile (ICBM) capable of reaching Alaska. Kim Jong Un at that time called the ICBM launch a gift for the "American bastards" on the US' Independence Day.\

There is a second successful ICBM test on July 28, followed by a third on Nov 29. Since then, the North has not conducted any nuclear or missile tests.

Trump has boasted that the statement reached between the US and North Korea on June 12 in Singapore resolved the old foes' nuclear stand-off, but Pompeo has been tasked with nailing down details.

There have been reports Kim's regime has failed to honour its denuclearisation pledge after the June 12 meeting. 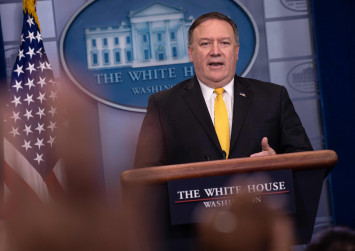 The Washington Post on Sunday quoted unnamed US officials who were briefed on intelligence findings that point to preparations for deceiving the United States, while NBC news has said Pyongyang is increasing its nuclear fuel production.

Citing satellite imagery, a monitoring group last month said operations and infrastructure works were continuing at the North's main Yongbyon nuclear site, while the Trump administration itself has cited "an unusual and extraordinary threat" from Pyongyang's nuclear arsenal to extend decade-long sanctions.

A report in Axios on Monday suggested if talks go well, Trump could invite Kim to New York in September to continue the dialogue as the UN General Assembly gets underway.

Separately, the US State Department confirmed that Secretary of State Mike Pompeo had spoken by telephone to his Russian counterpart Foreign Minister Sergei Lavrov.

Pompeo is due in North Korea for talks on a nuclear deal later this week, and his spokeswoman Heather Nauert said the issue came up in his conversation with Lavrov, along with the war in Syria and preparations for Trump's July 16 summit in Helsinki with Russia's President Vladimir Putin.