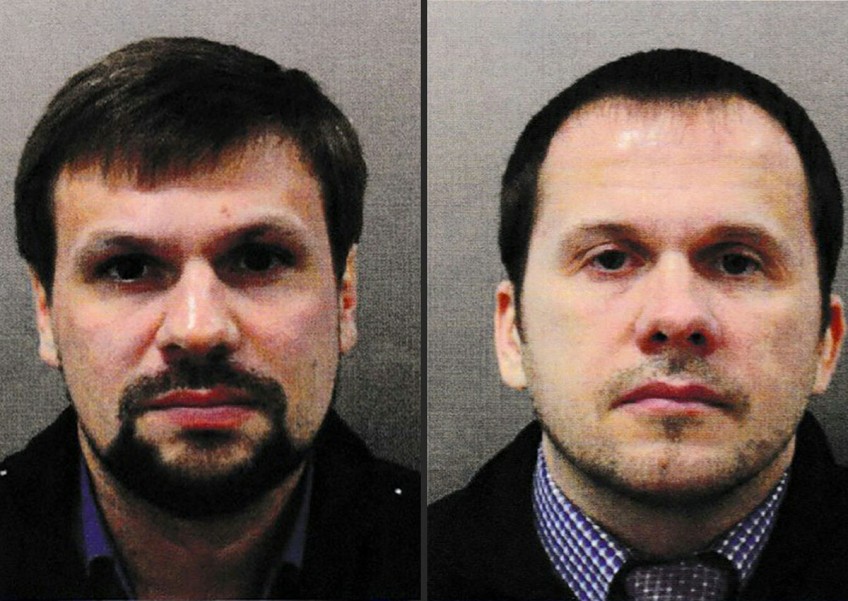 Prime Minister Theresa May said Wednesday that two Russian spies carried out a nerve agent attack on a former colleague in Britain, as prosecutors named the suspects and issued a warrant for their arrest.

Prosecutors announced charges against Alexander Petrov and Ruslan Boshirov for trying to kill Russian former double agent Sergei Skripal and his daughter Yulia with Novichok in the city of Salisbury on March 4.

May told MPs the pair "are officers of the Russian military intelligence service" -- the GRU -- adding that the attack had been sanctioned from higher up.

"This was not a rogue operation. It was almost certainly also approved outside the GRU at a senior level of the Russian state," May said.

London and its allies had previously blamed Moscow for the attack, which Russia angrily denied.

The row sparked a wave of diplomatic expulsions on both sides, as well as fresh US sanctions against Moscow which again denied involvement on Wednesday.

"Unfounded accusations are being levelled against Russia... and absurd demands are being made for explanations in connection with a situation which we have nothing to do with," the Russian Foreign Ministry said in a statement.

"Instead of conducting an independent, objective and transparent investigation... London continues to engage in anti-Russian megaphone diplomacy, continuing its propaganda show," the statement added.

Britain requested an urgent meeting of the United Nations Security Council, expected on Thursday, to update members on the situation.

The US ambassador to London, Woody Johnson, tweeted: "The US and UK stand firmly together in holding Russia accountable for its act of aggression on UK soil."

The Foreign Office summoned Russia's charge d'affaires in London to demand Petrov and Boshirov come to Britain to stand trial, a spokeswoman said.

But prosecutors said they would not formally seek their extradition, as Russia has made clear in previous cases that it did not extradite its nationals.

In 2007, Russia refused to extradite Andrei Lugovoi, the prime suspect in the murder by radioactive poisoning of former Russian agent Alexander Litvinenko in London.

"We have, however, obtained a European arrest warrant (EAW)," said Sue Hemming of the Crown Prosecution Service.

"(This) means that if either man travels to a country where an EAW is valid, they will be arrested and face extradition on these charges", which will never expire.

Britain's top counter-terror police officer, Neil Basu, said the two suspects had probably travelled to Britain using aliases. Photos of the pair were being made public in the hope that someone would recognise them.

He said the pair, who are in their 40s, flew into London two days before the attack and stayed in a hotel, where traces of Novichok were found in their room.

They visited Salisbury the day before to carry out reconnaissance and were captured on security cameras near Skripal's house.

Police believe they put Novichok, a military-grade nerve agent developed by the Soviet Union during the Cold War, on the door handle.

Skripal and his daughter were found unconscious on a park bench a few hours later. The suspects flew back to Moscow later that evening.

Petrov and Boshirov face charges of conspiracy to murder Skripal and the attempted murder of him, his daughter, and Nick Bailey, a policeman injured in the aftermath, prosecutors said.

They are also accused of using a banned chemical weapon and causing grievous bodily harm to Yulia Skripal and Bailey.

Russia's embassy in London said it wanted access to the Skripals, claiming they were being held in "forcible isolation by the British authorities".

"We have not seen any willingness on the British side to engage with a view to establishing the truth," it said.

Skripal was a colonel in the GRU who was jailed for betraying fellow agents to Britain's MI6 security service. He moved to England in 2010 as part of a spy swap.

The Skripals and Bailey both recovered from their poisoning, but on June 30, a British couple fell ill from the same type of nerve agent in the nearby town of Amesbury.

One of them, 44-year-old mother of three Dawn Sturgess, died on July 8.

Her partner Charlie Rowley had found and given to her a perfume bottle, falsely labelled as "Premier Jour" by Nina Ricci, which police said contained a "significant amount of Novichok".